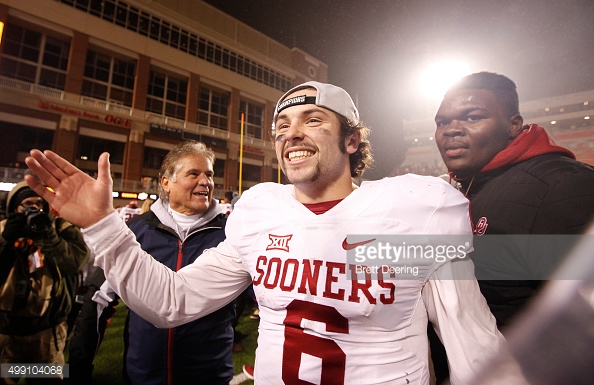 Here’s something that Oklahoma Sooners fans will be happy with heading into the Memorial Day Weekend. This report comes from Chuck Carlton at the Dallas Morning News.

A proposed rule change is on the agenda for the Big 12’s faculty representatives Wednesday at conference meetings next week in Las Colinas, commissioner Bob Bowlsby confirmed.

Under Big 12 rules, Mayfield was forced to sit out a year when he transferred following his freshman year and was penalized by losing a year of eligibility because of the move to another conference member. Mayfield and his family have argued that the rule should not apply to him because he was a walk-on and had yet to receive a scholarship at Texas Tech.

The whole rule is bogus to begin with, but, a part of me does get it. In a day and age where guys are transferring at an obscene pace, mostly driven by a more selfish, me-first, immediate gratification society, guys going to rivals would not be ideal.

From Mayfield’s point of view, since he was a walk-on, he should absolutely not have lost his year of eligibility. And Commissioner Bob Bowlsby is right when he says that the league would look terrible if he gets a waiver to play in another conference in 2017. You would be taking one of the biggest names in CFB out of the Big 12. Not a good idea, and the Big 12 does not need more bad publicity right now.

Here’s an addition to the report:

Piggybacking on @ChuckCarltonDMN‘s report, it will take simple majority vote of faculty reps next week to amend league’s transfer rule.

I hope this vote isn’t short-sighted with teams/schools just looking to prevent Baker Mayfield from playing at OU for one more year and looking at it from a competitive advantage standpoint. I hope everyone with a vote can look at the bigger picture and what is best for the student-athlete and the Big 12 moving forward.