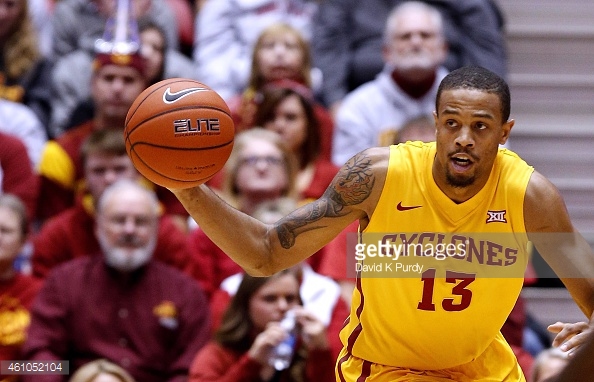 This is terribly sad news that came down regarding former Iowa State hoops player Bryce Dejean-Jones. Here is what the Associated Press reported:

A man living at the apartment was sleeping when he heard his front door kicked open, Dallas Police Senior Cpl. DeMarquis Black said in a statement. When Dejean-Jones began kicking at the bedroom door, the man retrieved a handgun and fired.

Officers who responded found Dejean-Jones collapsed in an outdoor passageway, and he died at a hospital.

The story continues in very bizarre fashion, basically, it sounds like Dejean-Jones was trying to get into the wrong apartment, got aggressive thinking his girlfriend had locked him out, and the tenant got nervous and overreacted:

Dejean-Jones was visiting his girlfriend for his daughter’s first birthday, which was Saturday, according to his agent, Scott W. Nichols. He said the girlfriend returned to the apartment first while Dejean-Jones went for a walk after they had gone out.

She lives on the fourth floor, and Dejean-Jones, who was visiting the complex for the first time, went to the third.

“He went to the wrong apartment unfortunately and I think he thought his girlfriend locked him out, so he was knocking on the door, banging on the door, it’s locked,” Nichols said. “So one thing led to another.”

It is legal in Texas for someone to use deadly force in order to protect themselves from intruders.

Assuming everything in this story is accurate, then it’s just a bizarre, very sad story. Dejean-Jones helped the Cyclones win the 2014-15 Big 12 title and was fourth on the team in scoring at 10.5 ppg in 33 games. Our prayers go out to Dejean-Jones and his family. There was also a lot of reaction from other NBA players and former teammates on twitter.

Prayers out to Bryce Dejean-Jones’ family! Lost a member of our hoop family too soon #RIP pic.twitter.com/iME7ReDuom

Saddened to hear about Bryce Dejean Jones. Condolences to his family. May he Rest in Peace.

Can Facebook, Amazon or Netflix save the Big 12?
Predicting 2016 Big 12 football win totals
To Top