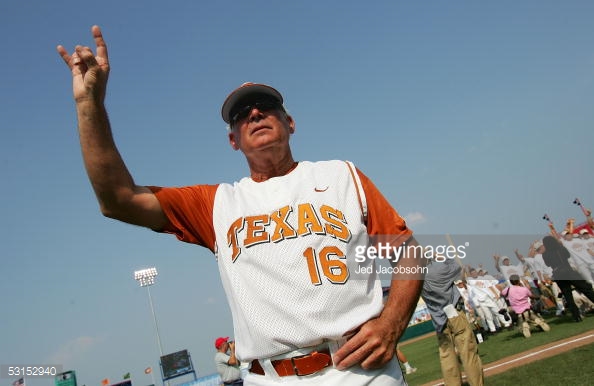 It’s been a whirlwind few years for Texas baseball and Augie Garrido, but it’s finally come to an end for the longtime coach.

At 77 years old and after 20 years on the job in Austin, Garrido is stepping down and will become a special assistant to athletic director Mike Perrin.

“I owe everyone at The University of Texas a million heartfelt thank you’s,” Garrido said in a statement. “I came here to serve and I am so proud to be able to continue to serve The University in my new role as Special Assistant to Mike Perrin.”

Garrido is the first baseball coach to lead two different schools to national titles. He won championships with Cal State Fullerton 1979, 1984 and 1995. Garrido was hired by UT in 1996 and he led his teams to the College World Series 15 times and made 33 NCAA Regional appearances, winning championships in 2002 and 2005.

Garrido has avoided the ax several times in recent years. In 2014, he guided Texas to a surprise appearance in the College World Series and then came within an out against Vanderbilt of advancing to the championship series. The very next year, the Longhorns went into the Big 12 tournament at just 26-25, but then went on a roll and eventually claimed the title.

“Augie has long been among the best coaches in college athletics, an exceptional developer of young men, great leader and tremendous representative of our University,” Perrin added. “I have deep appreciation, admiration and gratitude for all that he has accomplished in his 20 years leading our baseball program. From the two national championships he brought to Texas, to the many thrilling College World Series performances, Big 12 titles and becoming the all-time winningest coach in college baseball history, he has a vast list of success stories, but none greater than the positive impact he has made on the countless numbers of student-athletes he has coached.”