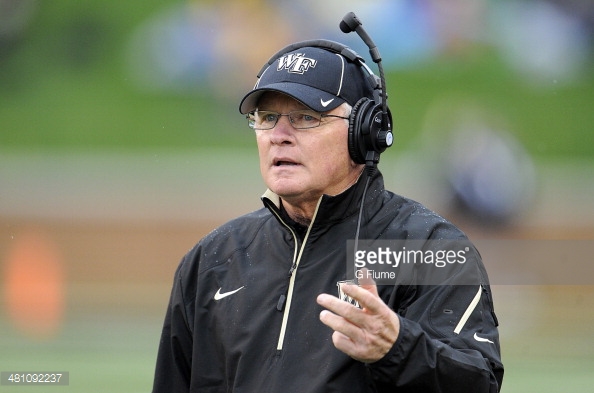 A little more than an hour after Jim Grobe’s hiring was made official, Baylor announced that athletic director Ian McCaw had resigned, severing another tie with the sexual-assault scandal that has tarnished the school’s reputation.

At 64 years old, Grobe has been out of coaching for two seasons. He spent 13 years with Wake Forest, helping turn around a program that had two winning seasons in 12 years before Grobe’s arrival. Grobe was 77-82, highlighted by an Atlantic Coast Conference title and Orange Bowl appearance in 2006.

Before taking over at Wake in 2001, Grobe coached Ohio University for six years. In 1995 he took over an Ohio program that had not won more than four games in a single season the previous 12 years.

Prior to Grobe’s tenure in Winston-Salem, the Deamon Deacons had gone to five bowl games in program history. But, under his guidance, Wake Forest played in five more bowl games.

He resigned after the 2013 season, his fifth straight at Wake Forest that ended with a losing record.

“As a coach, winning is important. At the same time, I want to assure the Baylor family that every decision we will make in this football program will be made with Baylor University, her students and our student-athletes in mind,” Grobe said in a statement.

As for AD Ian McCaw, ironically he was hired in 2003 after the murder cover up scandal within the men’s basketball program at Baylor led to the resignation of then-athletic director Tom Stanton.

“After much reflection and prayer, I have decided that a change in athletics department leadership is in Baylor University’s best interest in order to promote the unity, healing and restoration that must occur in order to move forward,” McCaw said in a statement.

The next question is: how much of the staff does Grobe keep on? Or, how much of the current staff is he allowed to keep on? Art Briles’s son, Kendal, is Baylor’s offensive coordinator and Briles’ son-in-law, Jeff Lebby, is running backs coach.

Baylor is already getting crushed on the recruiting trail, losing most of their 2017 early commitments and with some of their 2016 class deciding to not enroll.