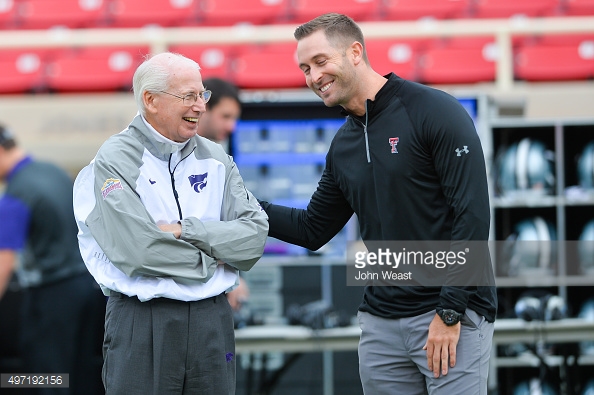 Almost two weeks ago, a handful of college football over/under’s were released. That list included four Big 12 teams which we gave you our predictions on their over/under’s for the 2016 season (Oklahoma, Oklahoma State, Baylor and TCU). Well, Las Vegas released their win totals for all 128 FBS teams. So, here are the other six Big 12 teams, along with our predictions. For the previous four schools, click the link above.

I am totally buying what Matt Campbell is selling. We know about the offensive weapons in Ames, highlighted by WR Allen Lazard and RB Mike Warren. But, more importantly, it’s the culture change at Iowa State that Campbell is bringing in that I believe will give the Cyclones another win or two that they typically may not have picked up under Rhoads. Sure, Paul Rhoads was known for his occasional big upset (cough, Oklahoma State in 2011, cough). But, they became few and far between in recent seasons.

Looking at the schedule, Iowa State has wins locked up against Northern Iowa and San Jose State. So, they just need to be two of the following: Kansas on the road, Iowa on the road, or Kansas State at home. I think it’s entirely doable. The Hawkeyes are coming crashing back down to earth this season, so don’t view them as last season’s Rose Bowl team. That was a fluke. After next season, Campbell will be talked about as one of the hottest names and young head coaches in the game. I’m buying whatever Matt Campbell is selling.

Last season was an 0-12 campaign for David Beaty in his first season in Lawrence. Now, it’s time for that first win, and it comes in Week 1 at home against Rhode Island. That being said, I can’t find another win on this schedule. Home vs. Ohio? Maybe… a chance? On the road against Memphis is not an easy game. Then, it’s Big 12 play.

I believe 2017 is when Beaty starts to see some major improvements in turning his program around. The cupboard was just so barren when he arrived, it will take a couple years to get this team to even a competitive level.

K-State will be 2-1 after non-conference play (sorry, at Stanford to open the season is just too tough for this Wildcats team). So, can they go 4-5 in conference play? Simply put: no.

They have to go to WVU, OU, Baylor and TCU. Also, one of their more winnable games, against Iowa State, is on the road (and it’s homecoming weekend for ISU). The bye week comes a bit later than is ideal, as KSU goes from September 17th to November 5th without a week off.

There are issues at QB (I’m curious to see what route Snyder goes), which in the Big 12 will hold you back drastically, no matter how strong your defense is (just ask Texas).

Those who want Snyder to retire will start chirping a bit louder after the 2016 season wraps up.

Let’s just say, if I am wrong, and the Longhorns don’t go over, Tom Herman may be on the sidelines in Austin in 2017. I think Charlie Strong will, if given enough time, turn around the program. The question remains, as it always has in Austin, how patient is the UT fan base?

If Shane Buechele can be the freshman sensation at QB that I believe he can be, UT will approach the 9-win mark. Texas avoids the long road trip to Morgantown, gets Baylor at home, and then plays at Kansas (almost a bye week?) before a final tough game of the season home vs. TCU. The scary part is that the non-conference schedule is not easy, with games against Notre Dame and Cal.

But, the defense is going to be very strong, and with Buechele, the offensive skill positions continue to improve. If Texas can shore up the offensive line, the turn around could go into full force for the Longhorns.

Texas Tech’s schedule is as such where they could roll into a late October game against Oklahoma at 6-0, with a top 10 or 15 ranking, and a trip from College Gameday. Texas Tech’s schedule is very back loaded, with the only early tricky game in Week 2 against Arizona State. Granted, the second half stretch against Oklahoma, TCU, Texas and Oklahoma State won’t be easy, just winning one of those four sets Tech up in a great spot to go over.

David Gibbs has another year under his belt to turn around a struggling defense that allowed 208 yards per game on the ground last season, ranking 127th out of 128 FBS teams. The D-line lost familiar names Pete Robertson and Brandon Jackson, but maybe that isn’t such a bad thing. New faces like Kolin Hill and Ondre Pipkins could bring a boost to the Tech line that they have been desperately seeking.

There are two ways to look at the WVU non-conference: 1) it’s tricky with games against Missouri and BYU, 2) at least both games are at home. Still, if WVU splits those two games, which is a reasonably expectation, then they have to go 5-4 in conference to reach the over. Thing is, I have a hard time seeing that happening.

After a bye week following the Youngstown State game and before BYU, West Virginia does not have a single Saturday off. That’s brutal. Throw in concerns about rebuilding a defense that lost Karl Joseph and KJ Dillon, along with three cornerbacks (Chesnut, Worley, Rumph) and the Mountaineers are going to have to score 35+ points per week to have a chance in some games.

I like the Mountaineers to fall just under the number, go 6-6, and as a result, Holgorsen’s seat will be burning in Morgantown.

Augie Garrido will not return as Texas baseball coach in 2017
Could the Oklahoma Sooners face Baker Mayfield in the 2017 CFB Playoff?
To Top