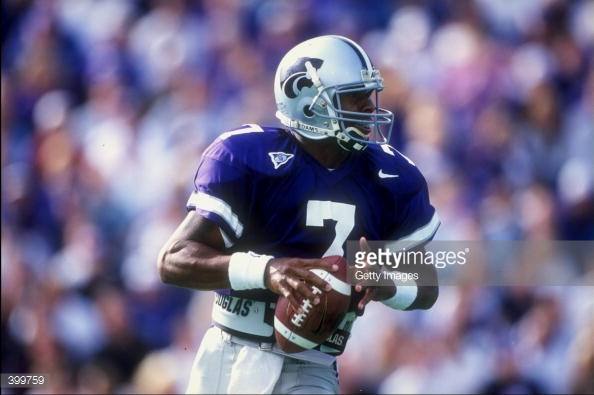 Michael Bishop may be receiving the highest honor from his college football playing days. Bishop is a nominee for the 2017 College Football Hall of Fame.

Bishop transferred to Kansas State from Blinn Junior College, where he won a National Championship. Then, he led the Wildcats to consecutive 11-win seasons in 1997 and 1998. As a junior, he guided K-State to an 11-1 record and a victory in the Fiesta Bowl. As a senior, he helped K-State to an 11-0 start and the first No. 1 ranking in school history.

The former Kansas State quarterback was one of 75 players and six coaches listed on the Hall of Fame’s 2017 ballot, announced Wednesday.

Michael Bishop was a consensus All-American and Davey O’Brien Award winner in 1998, as well as the Heisman Trophy runner-up.

Other accolades for Bishop include being inducted into the Kansas Sports Hall of Fame and K-State Athletics Hall of Fame.

There are others with Big 12 ties who are nominated for this year’s Hall of Fame, including former West Virginia coach Jim Carlen, who coached WVU from 1966-69 (Before commenting and calling me an idiot, I know, WVU wasn’t in the Big 12 in 1966, thanks). Former Colorado running back Eric Bieniemy has also received a nomination from his playing days in the Big 8. Then, there is one of the Big 12’s best: Nebraska QB Eric Couch, who also won the 2001 Heisman Trophy. And there’s TCU’s running back Kenneth Davis, a 1984 First Team All-American. Click here for the complete list.

The announcement of the 2017 Class will be made Friday, Jan. 6, 2017, in Tampa, Florida, where this year’s National Championship is being held.
**If you want a chance to win FREE Big 12 gear from your favorite team, be sure to sign up for our weekly newsletter! **

Podcast: Is ESPN honestly and fairly covering the Baylor football scandal?
Welcome back the Big 12 Championship Game (in 2017)
To Top