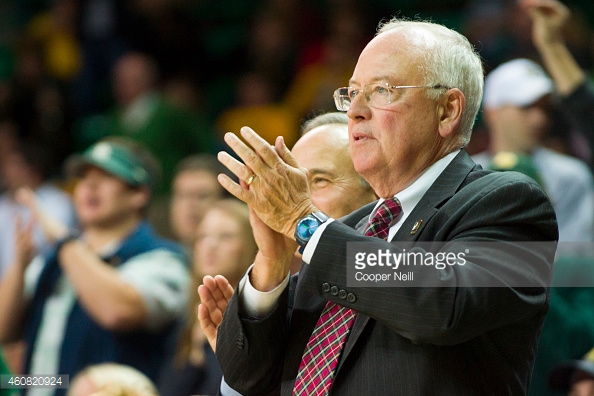 According to ESPN, former Baylor University president Ken Starr, has resigned from his current position as chancellor. Just last week, Starr was demoted to chancellor, following the university’s finding in the Pepper Hamilton report.

Baylor’s Ken Starr tells me he is resigning as chancellor as “a matter of conscience.” More with Starr in @SportsCenter exclusive.

Until last week, Starr held the job of president and chancellor. Starr was removed from his president post by the school’s board of regents after an investigation commissioned by the school found that Baylor failed to sufficiently investigate allegations of sexual assault against students, and football players in particular. The report also said Baylor didn’t provide sufficient support to victims who reported those assaults.

Anyway, here’s an image of the sit down of Starr with ESPN.

I find it interesting that Starr and Baylor chose to sat down with ESPN. I understand ESPN uncovered the scandal, or helped, with their Outside the Lines report. But, ESPN singled out Baylor as the football program they were going to hammer and drive all their energy and resources after. Meantime, the allegations at Tennessee are arguably worse! Multiple cases of sexual assault allegations, along with, allegedly, head coach Butch Jones and players, trying to guilt and shame another player for helping an alleged rape victim. There were no such firm allegations against Art Briles.

Don’t get me wrong, Baylor was in the wrong and is getting most of what they deserved. This is ultimately about the victims. But, Baylor is not alone here, no matter what ESPN wants to tell you or portray to be the case. If I were Baylor, I would have gone to another network. But, that’s just me.