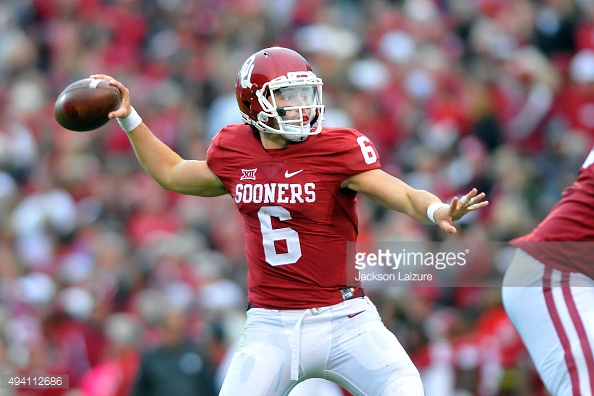 That’s the entirely plausible question that we can ask following the Big 12’s horrendous decision to deny Mayfield eligibility at Oklahoma for the 2017 season.

The Big 12’s ten dopes, also known as the Faculty Athletic Representatives, split on a vote Wednesday that would’ve given the Oklahoma quarterback an additional year of eligibility.

But, it wasn’t just about Mayfield, it was a proposed rule change that would’ve made non-recruited walk-ons (which Mayfield was a Texas Tech) not subject to the rule mandating the loss of a year of eligibility after a transfer within the conference. The vote needed 6 votes to pass, the final result was 5-5.

So now, most Oklahoma fans are believing Mayfield will just enter the 2017 NFL Draft. But, not so fast. It’s entirely possible he could now transfer to a school outside of the Big 12 and be eligible immediately.

You can’t make this shit up. The Big 12 might lose one of the biggest names in the game of college football, and one of the most exciting players in college football, because of a short-sighted vote by ten clowns, five of whom apparently can’t look past what they’re eating for breakfast tomorrow and what benefits them in the here and now.

This is the problem with the Big 12, everyone is looking out for themselves in the immediate future, instead of looking at the big picture and what is best for the entire conference over the long term.

I’d love to know the breakdown of the votes and how each team representative voted. You think Kansas voted against it? As if the Jayhawks have a chance in hell to beat the Sooners in 2017 if they don’t have Baker Mayfield. Give me a break!

Mayfield released a lengthy statement on Twitter, and it should make Sooners fans annoyed and the Big 12 nervous:

…I know how to make the most of my chances, that’s what my life has taught me. And if you don’t get the point already, I will be making the most of my last season I get to suit up for Oklahoma.

He didn’t say last college football season. Just his last season to ‘suit up for Oklahoma’. Imagine Mayfield leading Michigan, UCLA, Georgia or Florida State to a College Football Playoff berth in 2017. That would be lunacy.

Wednesday’s decision was the epitome of everything that is wrong today in the hierarchy, decision making, and character in the Big 12 Conference.

Hell, there are even random non-OU fans who understand how poor a decision this was by the Big 12.

As an OSU fan, I can’t say I’m disappointed with the Baker Mayfield decision. As a human being, I think it’s the wrong one.

Meantime, here is one of Mayfield’s teammates:

Everyone wants SAs to stay in school. As soon as one with talent wants to stay? Denied. Taking roommate applications for 2017 #FreeBaker