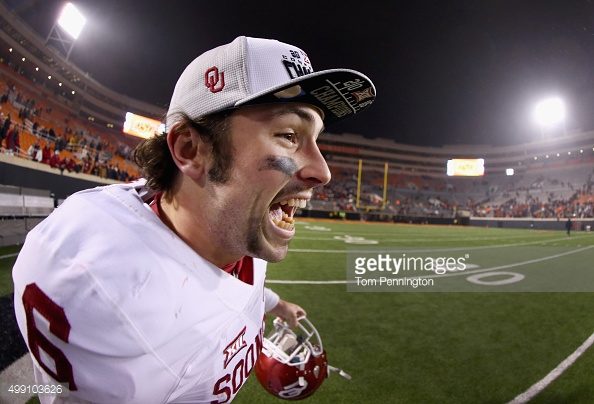 One day after making the egregious mistake of upholding a rule in which walk-on’s who transfer within the conference to lose a year of eligibility, the Big 12 reversed that decision in a 7-3 vote. Yesterday, the vote was a 5-5 split, with majority needed to change the rule.

It’s the right call. It’s not even debatable. As we noted in our story from last night, could you imagine if Mayfield won the Heisman this year, and then was tearing up the Big 10 for Michigan, or the Pac 12 for UCLA. Boy, the Big 12 would look like the biggest joke in college football.

Mayfield had some fun with this on twitter as well.

And y’all thought you were getting rid of me….

I’ve read mixed reports that the three schools who voted against the rule were Texas, Texas Tech, and Baylor/TCU. Texas doesn’t surprise me. They are just looking at it as the Baker Mayfield Rule. As for Tech, two reasons they would vote against it: 1) revenge, since that is where Mayfield transferred from 2) they have to stay in line with Texas. If realignment ever happens, Tech wants to join Texas wherever they end up. They have to play the obedient servant. That’s the reality.

Podcast: Fox messes up Oklahoma vs. Texas TV schedule, Baker Mayfield gets hosed
How should the Big 12 split up it’s divisions?
To Top