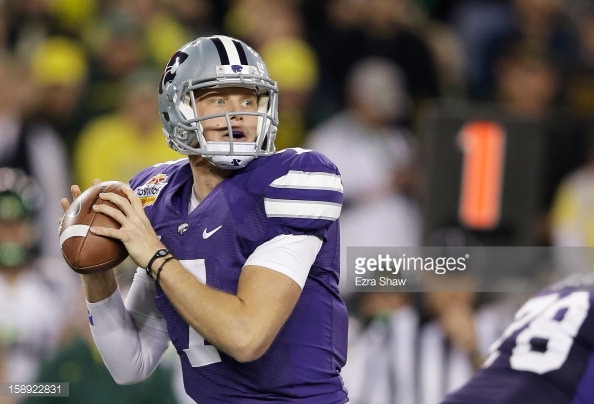 According to a report out of The Wichita Eagle, former K-State star QB Collin Klein is leaving the Wildcats, where he has been a grad assistant, is expected to accept a job with Northern Iowa as their quarterbacks coach.

In his first year on the job, QB Jake Waters threw for a school record 3,501 yards as a senior in 2014, with admitted help from Klein. Last year, as the Wildcats had a slew of injuries at QB, he passed his knowledge onto a long list of quarterbacks including Joe Hubener, Alex Delton, and others.

Klein is best remembered as one of the most decorated QB’s in school history. Klein led K-State to an 11-2 record and a Big 12 championship his senior season. The Wildcats won their first 10 games that season (including a memorable game in Norman that I had the pleasure of being in the stands for). K-State was ranked #1 in the BCS rankings in mid-November, before a late loss to Baylor (that I watched in Kansas City outside of the Sprint Center before a concert). They ended the season in the Fiesta Bowl.

Maybe one day Klein will be back as the head coach of the team. He certainly carries those leadership qualities that ever coach must have to be successful. I’m sure Kansas State fans understand this move as the young man is simply looking to advance his career as quickly as possible. Plus, it’s not like he’s joining the Jayhawks or the Longhorns!

Congrats, Collin! We wish nothing but the best to him moving forward… and hope one day he is back in the Big 12… and that there is still a Big 12!!

How should the Big 12 split up it’s divisions?
Ranking the Big 12 Mascots
To Top