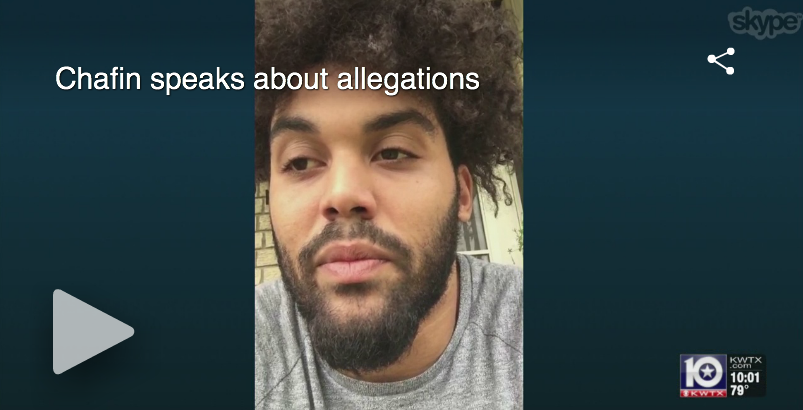 Former ESPN reporter Joe Schad posted on his Facebook page on Tuesday that Dolores Lozano will file a Title IX lawsuit against Baylor, claiming she was attacked several times by Chafin, and that Art Briles and assistant (also, Briles son-in-law) Jeff Lebby, knew about it.


As for Chafin, he spoke with KWTX in Waco and defended himself in the video below. Chafin says any accusations of him hitting, kicking, slapping, or slamming her against a wall are false. Chafin says in April 2014 she started fighting with him and he grabbed her to restrain her. Waco Police say Lozano reported to them in April 2014 that she was grabbed by Chafin, and her arm was slammed into a car door.


Ironically, it was Lozano, an aspiring sports writer, who wrote back in February for ESPN Houston, that Peyton Manning’s accuser may have had some other motives:

It is likely her allegations were made to cover up her promiscuity and collect some cash. On top of the lawsuits with the Manning family, Naughright sued Donna Karan over an “overly aggressive” massage in the fashion designer’s bedroom. I’m not saying she’s a gold digger, but I see a pattern of lawsuits from the doctor. Maybe she can help Kanye get out of debt?

All in all, I do think we need to be careful here. Yes, a lot of women have a right to sue and get justice for what happened to them at Baylor. But, moving forward, we cannot take everyone at their word. There will be opportunists and freeloaders looking to cash in. There’s no doubt about it. Once again, this is not a defense of any player or coach, but we cannot take a ‘guilty until proven innocent’ attitude with every Baylor player moving forward.

How should the Big 12 split up it’s divisions?
Report: Baylor considering one-year suspension for Art Briles
To Top