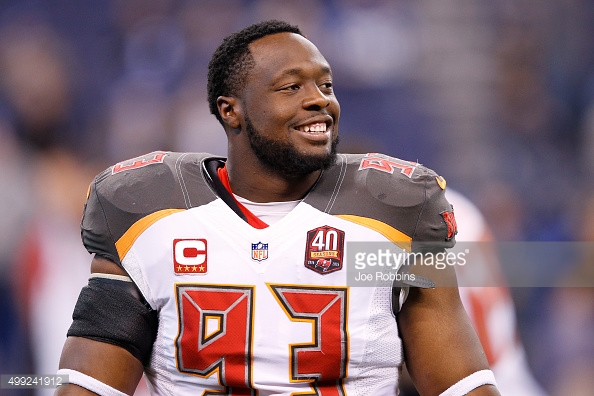 Gerald McCoy was an All-American during his time with the Sooners in Norman. Since heading to the NFL as the #3 overall pick in the 2010 NFL Draft, McCoy has made four Pro Bowls, has been named an All-Pro three times, and in 2014 signed a 7-year contract for $98 million. Needless to say, he has lived every high school recruits dream to it’s fullest: top recruit, to top college player, to NFL multi-millionaire.

So, when McCoy speaks, recruits listen.

Well, the Sooners already have one of the top recruiting classes in 2017. But, they are really looking to beef things up, as they’re considered one of the top choices for the nation’s No. 1 defensive tackle and top-10 overall prospect Marvin Wilson.

So, McCoy, of course a defensive tackle himself, decided to give his old coach Bob Stoops a helpful hand in recruiting.

@RDMW6 Idk what the struggle is about? You’re up the street from family and you’ll be dominant on a dominant team. Easy decision. #Boomer

Now in fairness, Wilson is from Bellaire, Texas, outside of Houston, not exactly around the corner from Norman, Oklahoma. But, we get his point. It’s driving distance.

Then, there was Wilson’s response:

But, McCoy wasn’t done yet. He’s on an all out recruiting pitch for Big Game Bob!

Along with being the the top defensive tackle, Wilson is considered by many services to be the top prospect in Texas. 24/7 Sports has LSU as the heavy favorite at 47%, followed by the Longhorns at 29%. Regardless, let’s hope Wilson decides to stay in the Big 12. The conference must continue to do a better job keeping the best players from Texas in their conference. They can’t keep losing their studs to the SEC.

Come on Marvin, make the right choice my man!