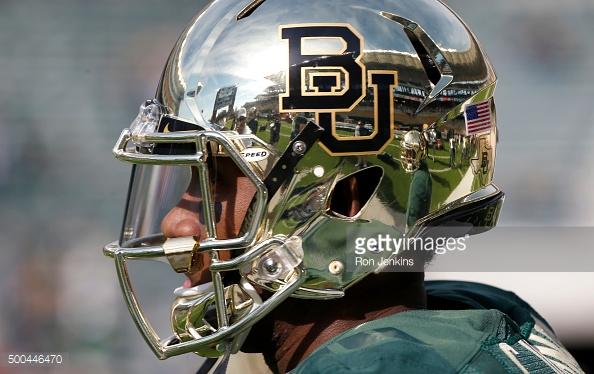 When will these recruits get it?

You never pick a University based on a coach, be it head coach, assistant coach, or water boy who is a cousin of your friend’s uncle’s half-brother. Wake up!

The NCAA should not allow any of these 2016 Baylor recruits to bail from their National Letter of Intent. Why? Because Baylor isn’t in any kind of NCAA trouble. There is no postseason ban, no scholarship reduction, heck, there is not even a fine. The only thing that has changed is the head coach, with the rest of the coaching staff in tact.

Most recently, high school All-American Parrish Cobb announced he would not be attending Baylor, and is trying to get out of his NLI.

“No, he will not be going to Baylor. It’s not about Coach Briles, it’s about trying to put Parrish in the right situation to be successful. It’s not the right environment for our son.”

If it’s not about Art Briles, then what is it Collis is referring to? Nothing else has changed. Frankly, the issues with loose standards regarding sexual assault accusations were at Baylor long before the Pepper Hamilton report was conducted. There was Sam Ukuwuachu last year, Shawn Oakman this year. Both those stories came out before Briles was ousted, but Collis Cobb believed then that Baylor was just a fine fit for his son.

The only people who believe all the Baylor recruits should be released from their National Letters of Intent are those who are fans of the Longhorns, Sooners, Red Raiders, Horned Frogs, LSU, Texas A&M … you get the point. These folks aren’t actually looking out for the well being of the student-athletes, they just want them on their roster! Many are pissed off that Baylor has been out-recruiting their team in recent years anyway, so this is their chance to get back at the Bears.

Don’t get me wrong, if the NCAA came down with massive sanctions, a la Penn State, then every recruit and player should have a right to transfer. But, that could not be further from the truth. So, therefore, the young men should have to honor their commitments.

It’s part of a bigger picture. As a millennial myself, I’m not writing this as a crotchety old man. But, the reality is that young people today don’t know how to honor their commitments. Whether those commitments are professional or personal, they are nonexistent. We have been taught as a society, and in many ways encouraged, to simply move on whenever a better offer, be it job, girlfriend, boyfriend, etc. come our way. It’s a terrible precedent that has been sent and is one of the minor reasons for our society’s decay.

Across college football, we’ve seen more and more players deciding to transfer when things don’t go there way right off the bat. Lose a starting job? I’m leaving. Get benched because of performance? I’m out. Young people no longer handle adversity well and that’s only getting worse.

By letting these Baylor commits bail on the program, when there are zero sanctions in place, or even differences in the coaching staff (outside of Briles) would be succumbing and enabling what has become a major problem in college sports, as well society.

So to Parrish Cobb, Kameron Martin, Patrick Hudson, Jared Atkinson and others, I say this: grow up, show your allegiance, and help turn around the story at Baylor. As Gandhi famously said: “Be the change you wish to see in the world.” Help change the storyline at Baylor and build a winner on the backs of good, quality young men like yourselves. Don’t run at the first sign of adversity. That’s what wimps do, although based on what’s transpired so far… that’s all Baylor has.