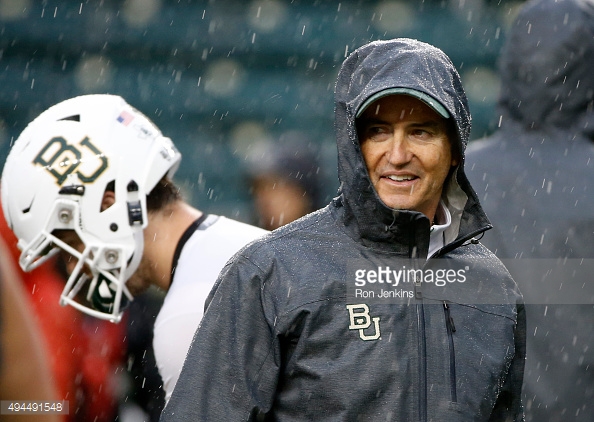 Well, that happened much quicker than we expected. Just when it looked like Briles and Baylor were headed for a nasty divorce, we get this report this morning from Jason King.

Briles had reportedly close to $40 million left on his contract that expires in 2023 when he was fired by Baylor’s Board of Regents on May 26.

Briles’ lawyer, Ernest Cannon, sent a letter Thursday to Baylor officials saying the school had fired Briles as a “camouflage to disguise its own institutional failure to comply with Title IX and other federal civil rights laws.” He also demanded that Baylor release the review conducted by the Philadelphia law firm Pepper Hamilton.

But, Baylor insists that there is no Pepper Hamilton report and it was only a verbal presentation. So now, Briles is seeking the minutes from that regents meeting.

It’s unlikely this is the last we hear about the divorce between Baylor and Briles, but at least for now, on the money front, the two sides are not at each other’s throats.

As more comes out on this we will post it here on Heartland College Sports.