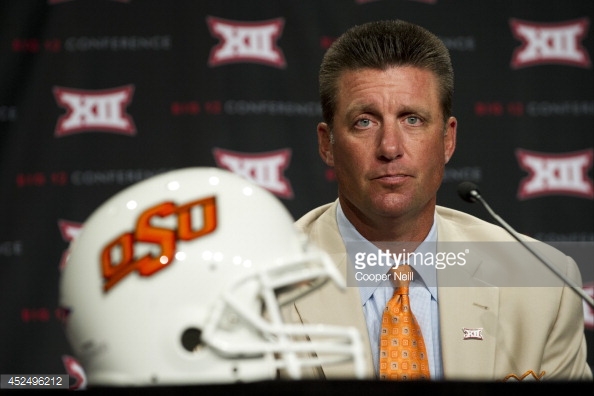 Let’s just say, I’m sure the board of regents meetings at Oklahoma State have been bit more enjoyable than the one’s at Baylor.

The OSU/A&M Board of Regents unanimously approved a two-year contract extension on Monday at the OSU-Oklahoma City campus, keeping Gundy in Stillwater through 2021. Gundy is set to make $4.15 million — $3.55 million in salary plus $600,000 in retirement plan contributions — in total compensation both years, matching the amount he was set to make in the final year of his previous deal (2019).

The extension goes into effect July 1 and (in theory) keeps Gundy in Stillwater through the age of 54.

In 2012, Gundy signed an 8-year deal worth just less than $30 million. Last season, he made $3.65 million, which made Gundy the 22nd highest paid coach in college football.

During his tenure, Gundy has a 94-47 overall record and will become the Cowboys’ longest tenured head coach in program history this season when he passes the 11 seasons of Pat Jones and Jim Lookabaugh.

Pete’s take: No brainer here. Nothing to see, nothing to discuss… just move on. Gundy is paid like a top-20 coach, about right. It’s a great deal for both sides and hopefully this marriage can remain healthy. Gundy certain said as much before last season, admitting he felt refreshed and renewed… so hopefully that all stays true and goes according to plan. Oklahoma State has it as good as they can have it right now with Gundy running the show.