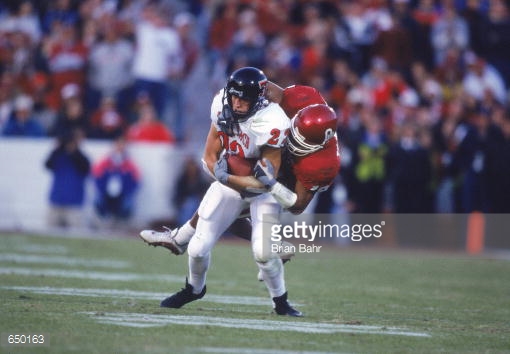 Thompson is accused of pawning a Glock .40-caliber pistol and a Remington shotgun at EZ Pawn, 2198 S. Sheridan Road, according to his arrest and booking report. The report alleges that he pawned the shotgun on Oct. 19, 2015, and the pistol on March 23.

Each gun was valued at $340, the report states. Both guns were issued to Thompson.

Thompson was a starter on Oklahoma’s national title-winning team in 2000. Oklahoma beat Florida State to win the BCS title 13-2 in the Orange Bowl. Thompson had one interception for three yards during the 2000 season.

According to the World, he was booked into the Tulsa Jail on Monday on the complaints, posted a $4,000 bond and was released.