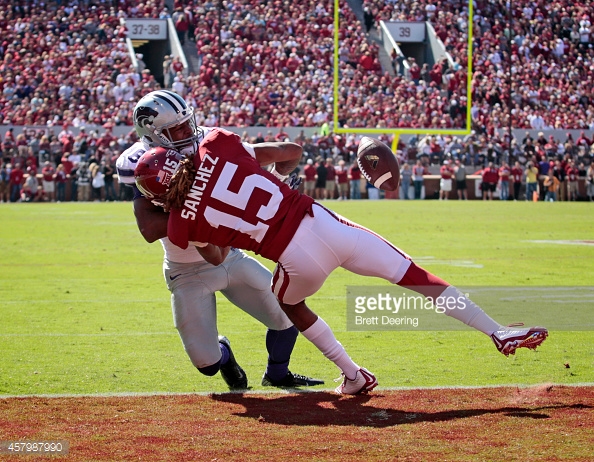 1. Trevone Boykin, TCU: Boykin’s career came to an unfortunate end with his arrest prior to the Alamo Bowl. But, the guy was electric on the field. And his story from failed QB to wide receiver to successful QB is fantastic. If you told any TCU fan that Boykin would finish in the top 10 of the Heisman voting in back-to-back years, they’d laugh you out of the building… or assume it was at wide receiver.

He was able to do it through the air or on the ground. With his dual threat ability and excitement, Boykin (and the system) was tailor made for the Big 12.

Ironically, the situation now is eerily similar to two years ago. Gary Patterson had to choose between Boykin and Matt Joeckel. Now, it’s Kenny Hill or Foster Sawyer. Dual threat vs. pocket passer. Based on the recent success under Boykin, my gut says Hill, who is more of a dual threat, has the edge.

2. Zack Sanchez, OU: Sanchez is one of two defensive players on the list. He brought a toughness at the cornerback position for the Sooners (which is lacking in the Big 12). He was a leader with both his actions and his words. Plus, he had a personality. The Fort Worth product once told an OKC TV station that his favorite sports moment was the Mavs (rivals to the Thunder, in his college’s backyard) winning the 2011 NBA Title.

Sanchez was drafted by the Panthers in the 5th round. That will turn out to be one of the steals of the draft. It’s goes along with the old saying, ‘the rich get richer’.  Sanchez is a loss for the Sooners and for Big 12 fans who liked to see a throwback style cornerback.

3. Wendell Smallwood, WVU: The do-it-all back is going to be sorely missed in Morgantown. I was always surprised when thinking about how Smallwood was 5’11” because he played much lower to the ground than his height. That worked in his favor as he could slip between defenses with ease, but he could be a bruiser when needed.

Also, Smallwood had good hands out of the backfield, racking up 57 catches over the past two seasons. He should be a really good fit in Philadelphia and a nice complement for DeMarco Murray in the backfield. Smallwood could have come back for a senior season, but was smart to bounce early. We’ve seen it too often in recent years with running backs. Their bodies only have so many carries. Even as a fifth round pick … get to the NFL, start making money, and hopefully get that big(ger) second contract sooner than later.

4. Emmanuel Ogbah, OSU: A first-round talent that barely fell to the second round. Ogbah was taken with the first pick in the second round, unfortunately he has to play for the Cleveland Browns. I always loved Ogbah’s game, but enjoyed him even more after this podcast we did with him a few weeks back.

Ogbah is the kind of guy you root for: comes over from Nigeria, learns the game, unranked at his position coming out of high school, 2 or 3 star recruit depending on which service you read, and worked his way to become a millionaire. Ogbah had the size but also the speed to chase down Big 12 QB’s. He will succeed in the NFL as either a 4-3 DE or a hybrid DE/LB in a 3-4 scheme.

5. DeAndre Washington, TTU: For Big 12 fans, it should not come as a surprise to hear the news this offseason that the Raiders have fallen in love with Washington and are expecting big things from the rookie. Washington, like Smallwood, was a legit dual threat RB, with great ability to catch passes out of the backfield (71 his last two seasons).

I’ll never forget Washington’s mid-November game last season against Kansas State where he piled up 248 yards on the ground, including ripping off an 80-yard run. He’s an electric player that will be a big loss for the Red Raiders. I love TTU QB Pat Mahomes, but I don’t think Mahomes, or the TTU fan base, realize how much they will miss Washington this coming season.

My best NFL comparison for Washington would be a Shane Vereen, but I believe he can be a more consistent runner and more featured than Vereen has ever been.

So… who did I forget? Who should be on the list that isn’t? Leave us your answers in the comments!