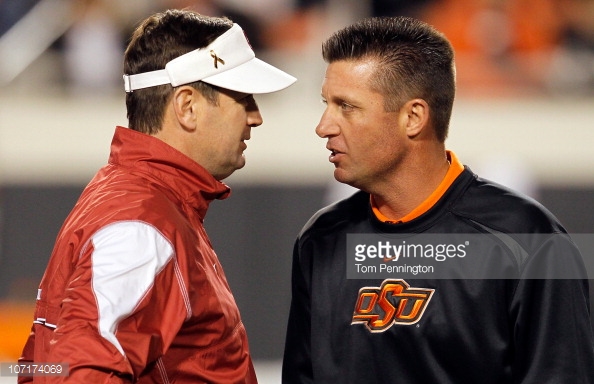 The South Point Casino released some of the early betting lines for the more popular games this fall.

Here are a list of a five games involving Big 12 teams where the spread just seems way off.

Note: I reserve the right to switch my picks for these games as we get into the season!

Iowa state (+17.5) @ Iowa: I realize Iowa was playing in the Big Ten title game last season. But, let’s be honest, that was a total fluke and luck of having an easy schedule. Iowa State will be playing under new head coach Matt Campbell and he will be looking to prove himself early in his tenure. Iowa State feels like a team with some surprising mojo thanks to Campbell and his staff, along with the success they’ve had on the recruiting trail. His confidence appears to have rubbed off on his players so far this offseason. Sure, the field is a different animal, but Iowa State always held their own against Iowa under Paul Rhoads. In fact, ISU has actually won 3 of the last 5 match ups, and the losses have been by 14 and 6 points. Iowa should win the game, but the number is huge.

Oklahoma (-4) @ TCU: Yes, the game is on the road and TCU’s defense should once again be strong. But, considering TCU still doesn’t know who their QB is going to be, the reigning Big 12 champs should have no issues down in Fort Worth. Plus, the Sooners will be fresh off a bye week, and could be angry if they come up short against Ohio State. For TCU, it will be their fifth straight week with a game to open up the season. Also, the Horned Frogs still might be figuring out their offense as they don’t only have to replace QB Trevone Boykin, but also stud WR Josh Doctson. This number is to small and I bet it grows to nearly a touchdown by the time we get to the final week of September.

Texas Tech @ Kansas State (pk): Kansas State is a roster in flux right now. Meantime, Texas Tech will have one of the most potent offenses in the country with an improved defense (hopefully, for their sake). The weather is still good in early October and Mahomes and company should have little issue getting up and down the field against K-State’s defense. Tech should at least be a field goal favorite here and it will swing in their favor by October. Prior to this game, Tech has a bye week and a home game with Kansas, while K-State comes home from a road game against West Virginia, and goes to Oklahoma the following week. That’s a tough run for the Wildcats. Tech will pick ’em off with ease.

Oklahoma State (-4) @ Kansas State: OSU is a dark horse to reach the College Football Playoff. Mason Rudolph could be in Heisman contention at this point. The Cowboys schedule leading up to the match up in Manhattan goes as such: bye week, @ Kansas, vs. West Virginia, not exactly murderer’s row. Meantime, K-State will be playing their 8th straight game before heading into a bye week. OSU will have plenty on the line here, while K-State will be limping and just trying to become bowl eligible. K-State will have a strong secondary that could neutralize Rudolph, but at this point, the line seems to be giving the ‘Cats too much respect.

Oklahoma (-13.5) vs. Oklahoma State: This makes no sense. It’s a huge rivalry game and the Big 12 title, along with a spot in the College Football Playoff, could be up for grabs. Or, it could be OSU trying to spoil OU’s bid for a CFB Berth. Who knows. There are several scenarios that should offer up a reason for why this game will be well within the nearly two-touchdown margin. Also, there was that whole 58-23 win by the Sooners last year. Think Mike Gundy’s crew won’t remember that? There are too many storylines here to simply make OU a heavy favorite. If the line was installed around 9-10, I would understand it and respect it. 13.5 is just too big a number off the bat.