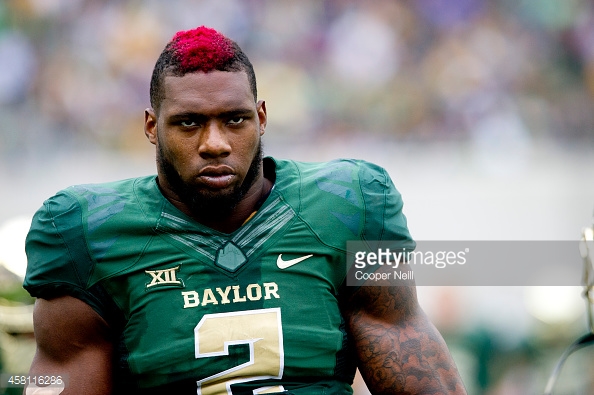 The allegations stem back to an incident that allegedly took place at Oakman’s James Avenue apartment on April 3rd.

According to the affidavit, the woman met Oakman at a Baylor-area bar on Speight Avenue and Oakman asked her if she wanted to go to his residence. They walked to Oakman’s duplex and Oakman “forced” her into a bedroom.

Oakman told police detectives that the sexual relationship was consensual.

According to warrant returns, that DNA samples were taken from Oakman’s mouth and that investigators took his cellphone, which was used to place two calls to the alleged victim after Oakman learned he was under investigation.

The former Baylor standout was arrested at around 2 p.m. on April 13 after meeting with Waco detectives about the sexual assault investigation.

Oakman’s attorneyMichelle Tuegel had the following to say after the indictment: “Shawn Oakman maintains his innocence in regard to the recent accusations made against him, and he insists that the sexual relationship in this case was consensual. It is unfortunate that this situation has been lumped in with other events that are unrelated. It is important that we not rush to judgment. Every citizen accused of a crime in this country is presumed innocent unless the state proves the accused offense beyond a reasonable doubt in a court of law. We look forward to vigorously defending Mr. Oakman and presenting the facts involved in this situation.”

Despite becoming a Third-Team All-American, Oakman didn’t meet the lofty expectations that were projected for him last season, where he finished with 14 ½ tackles for loss and 4 ½ sacks. He finished his Baylor career as the school’s all-time leader in sacks with 17.5 and second with 46 tackles-for-loss list.