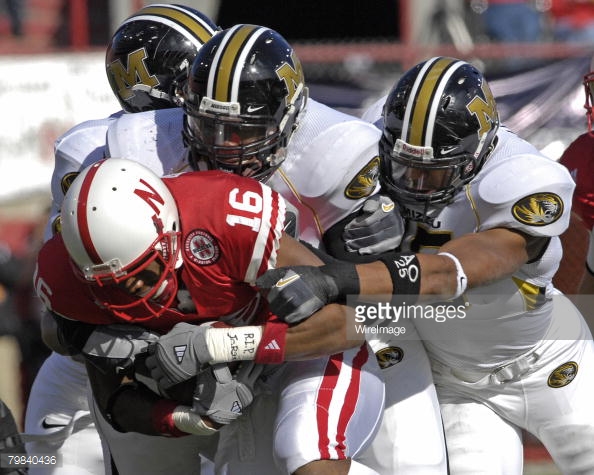 Ah, the good old days. Nebraska vs. Oklahoma. Missouri playing Kansas in the Border War. That’s when the Big 12 was at its apex.

Well, Kansas State coach Bill Snyder made some headlines at Big 12 Media Days on Tuesday when he said there are two teams he knows of who want back in the Big 12. We have the audio on our site.

But, who are those teams? Many speculated it was Nebraska and Missouri. While I have no confirmation, the general consensus on this topic would lead to those two teams.

First off, Texas A&M would never admit that leaving the Big 12 was a mistake. And, for the most part, I think their fan base is happy to be out of Texas’ shadow. Meantime, Colorado has struggled so mightily, and has been far too irrelevant to even have an opinion on whether or not they miss the Big 12!

So, what are the odds either comes back to the Big 12? Let’s be honest, slim to none. But, if there is an argument to be made, it’s in favor of Missouri over Nebraska.

First off, when it comes to the Tigers, there is no penalty for leaving the SEC. Mizzou can walk out the door tomorrow. That’s the kind of strength the SEC figures they have. Their attitude is: you want to leave us, the door is that way.

Well, the door may be looking pretty nice to some folks around Columbia. According to Jeff Parles, producer and host at KTGR in Columbia, “The money they make from the SEC and the fact that they never have to deal with Texas makes the SEC a great place for Mizzou. The counter to that is people around here miss the Kansas rivalry horribly. Plus, Mizzou is not really respected at all by its SEC counterparts, especially SEC fans, even with the two East Division crowns.”

Also, Parles believes there is a whole chunk of SEC fans who want Mizzou out, especially after the protests from last fall.

I was not shocked to hear that. First off, the debacle on campus last year involving the football team was shameful and an embarrassment. The firing of the President had nothing to do with the allegations or demands of the players. Mizzou’s student body President, Payton Head, a gay black man, turned out to be a liar. The entire movement was a sham.

That being said, Missouri was never a natural fit for the SEC. It doesn’t work geographically, the fan base isn’t in love with it, and if the money in the Big 12 can come somewhat close to that of the SEC, it might just be worth it.

Last season, the SEC paid out $31 million per school. The Big 12 paid out $25 million. But, by adding a Big 12 Championship game, the Big 12 team’s would get another $2-3 million per year. Would Missouri consider taking a slight pay cut to get back to its roots? In this money hungry era, it seems like a longshot, but it’s worth looking into.

Nebraska coming back is even more unlikely, but it’s also more appealing. Getting back to an OU-Nebraska rivalry would be absolutely fantastic for the Big 12.

But, there are several hurdles. While I could never track down the specific details, I was able to find out that the Big Ten and Pac-12 don’t have a base exit fee, but they also have grants of rights in place that could prove incredibly costly if a school were foolish enough to leave anytime soon.

We spoke with John Gaskins, now of 98.1 in Sioux Falls, South Dakota, but he is a Lincoln native, went to Nebraska, and previously hosted on 93.7 The Ticket in Lincoln. Gaskins said that, at the time, a move to the Big 10 made sense, “Texas always ruled the Big 12 politically, and because Nebraska dominated the Big 8 in football, when it entered the league, the Big 8 rivals, particularly the Big 12 North rivals,  sided with Texas on any league issue. Anything to screw Nebraska to take it down a peg, particularly the elimination of Prop 48 players, which Texas and Southwest Conference schools didn’t have.” Former Kansas State president Jon Wefald admitted as much in his recent book.

Gaskins did admit that the 2009 title game was the final straw. When officials put a second back on the clock after the Huskers thought they’d beat No. 2 Texas for the title, and the Longhorns kicked a field goal to win, the “Texas hatred was at an all-time high.”

But, as a fan, Gaskins did admit that while the road trips to the Big House and Horseshoe are fun, most fans “sorely miss the old Big 8 teams. They miss the cheap 3-6 hour trips to KU, KSU, ISU, Mizzou and Colorado. They miss showdowns with Oklahoma, and as much as they hate to admit it, Texas.”

So, could this ever happen? Due to the grant of rights, probably not. Alas, it would be a helluva comeback! Academically, Nebraska likes being in the Big Ten, which includes only Universities that are a part of the Association of American Universities.

The more likely of the two to leave is Missouri. Even that seems unlikely at this point. But, the Big 12 should be open to their return. The fan base is strong, it’s a very quality University, and while they’ve had their warts lately both on and off the field/court, it would like welcoming back an old friend. Bringing back the rivalry with Kansas and its other Big 12 foes would be fun and energetic and help bring in more eyes to the TV sets.

As for where else the Big 12 should look for expansion? Houston? Cincinnati? BYU? There are plenty of options. But, we’ll address this more in the coming days in our articles. The roller coaster ride in the Big 12 is just getting started. Buckle your seat belt!

Bill Snyder: Two teams want back into Big 12 (with audio)
Can the Mountaineers Compete for the Big 12 Title?
To Top