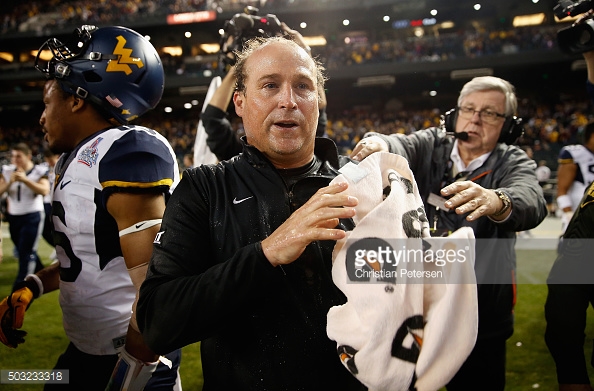 At the beginning of the summer we highlighted some Mountaineers to watch for the upcoming football season. Following summer workouts, some graduate transfer additions, and Big 12 Media Days, now seems like the perfect time to project what we should expect for the 2016 West Virginia Mountaineers.

Starting with the center on the offensive line, WVU boasts All-Big 12 preseason selection Tyler Orlosky. Flanking him at left and right guard is senior Adam Pankey and junior Kyle Bosch. Watching the blind side of the quarterback is sophomore Yodny Cajuste, and junior Marcell Lazard is expected to continue starting at right tackle. That’s 82 combined starts for this unit, with Cajuste being the inexperienced one, having only six starts. This group cleared the way for Wendell Smallwood while he became the Big 12’s rushing leader last season, and Holgorsen hopes the addition of assistant coach Joe Wickline can duplicate that performance this season.

“Arguably the best O-line coach I’ve been around..I feel like we need to get back to our roots just a little bit more, maintain the run game,” Holgorsen said about Wickline and the offense on Day 2 of Big 12 Media Days. “I feel like we’ve got three capable bodies to do the same stuff that Wendell did, and then we’ve got to improve in the pass game.”

Improving in the passing game starts with senior quarterback Skyler Howard, but Holgorsen doesn’t feel it should end there.

Howard has shown flashes of brilliance, including last season’s final game where he amassed 532 passing yards and five touchdowns. With a full offseason under his belt, a better rapport with his young receivers, and a more stable pocket surrounding him, Howard has all the necessary tools and gadgets to propel this Mountaineers team to the top.

Taking handoffs from Howard will be senior Rushel Shell and newcomers Kennedy McKoy and Justin Crawford. McKoy is a true freshman, while Crawford is a product of the junior college system. During his time there, Crawford averaged 220 all-purpose yards per game and scored 36 career touchdowns. A number of junior college players have successfully jumped the ranks in college football, and even gone on to the NFL (Bruce Irvin & Kevin White).

Wide receiver is one position the Mountaineers have huge expectations at. Some people refer to LSU as “DBU” (defensive back university) for the number of cornerbacks they put into the NFL. I would like to formally proclaim WVU as “Wide Receiver University”. With the likes of Tavon Austin, Kevin White, Stedman Bailey, Mario Alford, and scat back Charles Sims, the Mountaineers have the credentials to claim “WRU”. Looking at current ‘Eers to follow in those same footsteps, go no further than speedsters Shelton Gibson and Jovon Durante. Gibson led all receivers last year with 887 yards and nine touchdowns, while Durant started nine games as a true freshman and racked up 378 yards, scoring five times. During the offseason, Holgorsen brought in Tyron Carrier, who was a former standout wide receiver at Houston for Holgorsen, to be the wide receivers coach. His familiarity with Holgorsen’s offense will be important in assisting the young Mountaineers with their understanding and overall development. Having speed on the outside is a great asset, and the Mountaineers are very comfortable with Gibson, Durante, and senior Daikiel Shorts. Not to mention Ka’Raun White, brother of former ‘Eer Kevin, and he’s projecting to have a breakout season just like his older sibling did in 2014. Kevin jumped from 35 receptions for 507 yards and five touchdowns his junior season, to 109 receptions for 1,447 yards and 10 touchdowns his senior season. Ka’Raun only had 15 catches for 275 yards last year, but Kevin had an extra year on his younger brother. Ka’Raun enrolled at WVU during the summer of 2015, and will only be entering his junior campaign this fall. With subconscious expectations surely looming, let’s just come out and ask the question; Can Ka’Raun, or even a yet-to-be-mentioned White brother, surpass what Kevin did in old gold and blue? Regardless, this upcoming season will be one to watch as the Mountaineers hope for a breakout star.

Flipping to the defensive side of the ball, WVU returns only seven players that had a total of 78 starts last year. Losing handfuls of players to the NFL is never a bad thing for a college football program, but it can hinder the possible success for the following season. And for the Mountaineers, this is that season. The inexperience is only measured in starts, though, as there are many upperclassmen on this unit with real-game experience. 11 seniors are listed on the preseason depth chart that expect to garner snaps. That number doesn’t include junior college transfer Elijah Battle, Iowa graduate transfer Maurice Fleming, or Miami (Fl.) transfer Antonio Crawford. All three players are senior defensive backs, so while replacing safety Karl Joseph and corner Daryl Worley isn’t an easy task, it helps having upperclassmen to make that transition. Kyzir White, the younger brother of Kevin and Ka’Raun, plans to see some time at safety. All three White brothers played at Lackawanna junior college before making the leap to WVU. Kyzir was the top-rated junior college safety in the country before signing with the ‘Eers. Also in the secondary, WVU returns Dravon Askew-Henry, who is poised for another enduring season, being a full time starter since he stepped on campus. Marvin Gross, Jr. is another player who could surprise people.

The linebacking corps is young in starts, but a seasoned unit in game action. Seniors Justin Arndt and Sean Walters are expected to contribute, along with Xavier Preston, Al-Rasheed Benton, and Hodari Christian. These five have combined to appear in 130 career games at WVU. This bodes well for Tony Gibson, as familiarity with the 3-3-5 stack only enhances its effectiveness.

Last but not least, we have the defensive line. Preseason All-Big 12 selection Noble Nwachukwu returns from a junior campaign where he led the team in sacks with 8.5. Senior Darrien Howard will clog up the middle, while another senior, Christian Brown, fills out the final defensive end position. These three seniors combined for a total of 40 career starts, with 100 total games played.

The Mountaineers graduated twenty seniors from the 2015 roster. In 2016, they look to reload, and relaunch their program into another stratosphere.

Would Nebraska or Missouri ever come back to the Big 12?
Should the Big 12 try to own the state of Texas by adding SMU, Houston?
To Top