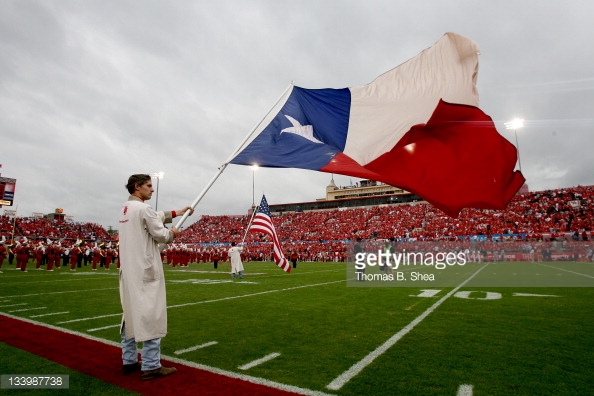 With every Tom, Dick and Harry giving his two cents on Big 12 expansion, here’s a thought I haven’t heard that makes sense: what if the Big 12 just said to themselves, “F it, we are going to double down, and own the state of Texas” ?

So, what does that mean from a recruiting perspective? It means adding Houston and SMU.

Yes, Houston is considered to be a favorite in the expansion race. The other most talked about teams include BYU, Cincinnati, and some combination of Colorado State, UConn, UCF, etc. By now, we all know the teams that are being discussed.

But, the critics who are against Houston are many fans and heavy-hitters of current Big 12 teams and Universities that don’t want to have to compete against another Big 12 team in Texas (where most of the conference does their recruiting). But, here’s are the facts over the past five years: the SEC is infiltrating the Texas recruiting scene in a big way.

Of the top 10 players in the 2016 recruiting class from the state of Texas, only four stayed in the Big 12. The other six went to Houston, Alabama, Florida, LSU, Stanford and Ole Miss. Three of those other five teams involved are SEC programs. Also note, those four that stayed in the Big 12 … ALL went to Texas. So, no one else in the Big 12 is even getting those players, other than UT.

By comparison, in the 2006 recruiting class, eight out of the top ten players from Texas committed to Big 12 teams.

So, the Big 12 can either keep getting poached by the SEC for some of the best players in Texas, or double down on their stake in the Lone Star State, and try to completely own it at every level.

We know what the move by Texas A&M did. It hurt the Big 12 on the field, academically, and rivalry-wise. Then, it gave the SEC a solid footprint in the state and on the recruiting trail.

So, yes, Houston and SMU each have their flaws. But, there are also major positives to making these two teams the two additions for the conference. The biggest one is that both have a committed and wealthy donor base that will take pride in being in the Big 12 and will help keep the best recruits from Texas in the state, and as a result, in the conference.

Guys like Mike Gundy, Bill Snyder, Matt Campbell and others may not like having to recruit on the same level against another Texas school. But, this has been the Big 12’s problem forever, hasn’t it? Selfishness. No one was ever looking out for the greater good of the conference, and everyone was always looking out for themselves.

SMU has certainly had their past issues in terms of football scandals, but in fairness, that was a generation ago, and today, I don’t see anyway they would have received the death penalty for what they did. It’s not worse, or no worse, than other issues that have happened at places like Penn State, Miami, USC and others. Also, SMU is now pouring $150 million into their athletics facilities.

SMU is a very good academic school with a really big endowment of $1.5 Billion. There are plenty of movers and shakers with SMU ties. I realize they have not won a National Title in any sport since 1986, but I really believe those things are not important for the long run. They can be changed. SMU has a football history, and strong alumni base in the most talent-rich state in the nation.

We know and have gone over the benefits of Houston, including the TV market, donor money behind the programs and facilities, and the improved play on the field.

But, in addition to locking down recruiting in the state, SMU and Houston help solidify two of the top five biggest media markets in America: Houston and Dalls-Fort Worth. I realize SMU games are not highly rated in the DFW area. But, if SMU were to get into the Big 12, and the program had improved under Chad Morris, you don’t think SMU-UT or SMU-TCU would do a big number in the DFW area? I think it would be huge. Just like I believe UT-Houston would do a massive number in the Houston market and would crush almost any SEC game. The quality of TV markets are as big a driver as any to getting more television dollars (see Rutgers to Big Ten).

Unlike cities like Chicago, which is losing residents, the cities in Texas, and the state overall, is adding at a massive rate. According to the U.S. Census, Texas had over 25 million residents in 2010, which was a 20.6% increase since 2000.

Those numbers are enormous. There is no state more valuable from a recruiting and TV perspective than Texas.

I realize there will be haters out there who will say SMU and Houston are ‘not worthy’ of being Big 12 members. But guess what? NO one is! Every candidate is slightly flawed. So, why not go with the two who actually can bring a combination of things to the table to help strengthen and solidify the conference: solid academics, decent on field performance, and locking down the ever-valuable Lone Star State.

Call me crazy, but in this bizarre world of conference realignment, it just might make sense.

Can the Mountaineers Compete for the Big 12 Title?
Ranking 2016 Big 12 Quarterbacks
To Top