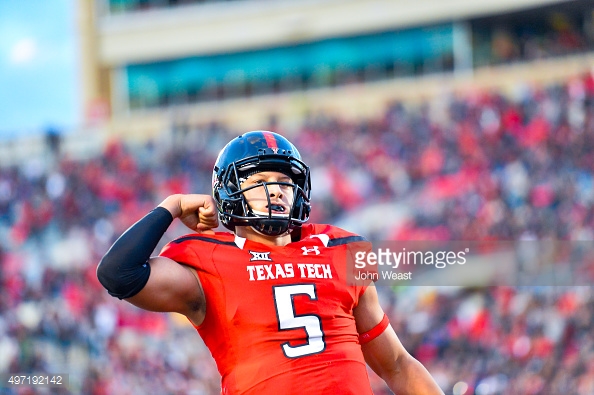 We are officially five Saturdays away from getting to our first college football weekend. While I hate to see summer go, college football’s return always helps ease the pain. So, to help kill some time over the next few weeks, how about ranking the quarterbacks in the Big 12 heading into the season? Here we go.

1. Patrick Mahomes, Texas Tech: Mahomes is now starting to get more press as we approach the 2016 season, but I mentioned in an interview with his father back in April that I thought Patrick would be a Heisman contender once the season got rolling. Mahomes is a total stud, coming off a 36-touchdown season in 2015, while throwing for more than 4600 yards. He is not a traditional dual-threat QB, but can use his wheels if needed. Regardless, he is a passer first, and darn good at that. OU’s Baker Mayfield gets more hype because his team is better, but if I could take any QB in the Big 12, it would be Mahomes.

2. Baker Mayfield, Oklahoma: Mayfield’s name is rightly thrown around as a candidate to win this year’s Heisman Trophy. It’s more than understandable after leading OU to the College Football Playoff last year thanks to a 36-7 touchdown-interception ratio and proving early on to be a clutch player (i.e. Tennessee game). With the Sooners 2/3 favorites to win the Big 12, Mayfield will likely get more publicity than Mahomes, but as much as Mayfield got the moniker as a clutch player, he also can try to do too much at times and can let his emotions get the best of him. Mayfield took 39 sacks to Mahomes’ 27.

3. Mason Rudolph, Oklahoma State: Rudolph could be a dark horse candidate for the Heisman this fall. The true-junior QB now has a full season + under his belt and is the clear leader of the offense. A lot of his success will hing on the offensive line improving and as a result, improved success by the running game. If the Cowboys can see improvements there, Rudolph will become an overnight star to all of college football. As a sophomore last season, Rudolph threw for nearly 3,800 yards with 21 TD to 9 INT. If things break right, Rudolph could definitely reach the 35 TD number this fall and the Cowboys could find themselves in a position to shock the Big 12, and the nation.

4. Seth Russell, Baylor: The only reason Russell is this low on the list is because of all the uncertainty surrounding Baylor and Russell personally, as he comes back from neck surgery. In just 7 games last season, Russell tossed 29 touchdowns to 6 interceptions, and continued the legacy of huge numbers being put up with Baylor QBs. Yes, offensive coordinator Kendall Briles is still in charge of the offense, but can interim head coach Jim Grobe stick to his word and let the system do its thing? Or does he try to put his personal stamp on the offense? Baylor has the best offensive trio of Russell, RB Shock Linwood, and WR KD Cannon, but there is still a ton of questions as to how this team responds in the fall. They can make a run with this team in this conference, or they could flop under extreme pressure, change, and scrutiny.

5. Skyler Howard, West Virginia: Howard can and has put up big numbers, throwing for over 3,000 yards last season with 26 touchdowns and 14 interceptions. He is more of a runner than he is given credit for. But, he struggles on the road, where WVU went 1-4 last season. Plus, Howard loses the Big 12’s leading rusher in Wendell Smallwood, and needs to make a quick connection with his young wide receivers Ka’Raun White and Daikiel Shorts. Howard completed less than 55% of his passes last season, and now will be asked to do more and make fewer mistakes. Time will tell if he’s capable of doing it.

6. Joel Lanning, Iowa State: Lanning took over midway through the 2015 season and made an immediate impact. He was 88 of 164 for 983 yards with six touchdowns and four interceptions during his five starts, which was highlighted by a 24-0 win over Texas in his first career start. Now, under new head coach Matt Campbell, Lanning has to learn a new system that is, when working right, a run-first offense. Ideally, a solid run game (led by RB Mike Warren) will force defenses to bring numbers into the box and leave defenders isolated on the outside, so Lanning has some easy hook ups with WR Allen Lazard.

7. Joe Hubener, Kansas State: Now we begin the list of guys who we really don’t know if they’ll actually be starting come September. While starting 11 games, Hubener completed 47.6 percent of his passes for 1,837 yards, nine touchdowns and 10 interceptions. But, the starting QB job could easily go to Jesse Ertz (more likely) or Alex Delton (less likely). Regardless, K-State struggled at the position all season, completing 47 percent of its passes and ranking 113th nationally out of 127 teams in passing efficiency. Bill Snyder has recently said K-State has ‘three number ones’. But, let’s be honest, any coach who says that really has ‘zero’ number ones. So, I threw Hubener’s name in here as the starter, but it very easily could change by the opener. In fact, my hunch is that it will change. I’d go with Delton.

8. Kenny Hill, TCU: Here’s another guy who could actually be on the bench for the Horned Frogs’ opening game. Hill is currently in a QB competition with Foster Sawyer. But, my inkling is that Hill has the edge for the job. Hill’s career got off to a hot start in the 2014 season, nicknamed “Kenny Trill” and even generated some Heisman buzz. But, Hill lost the starting job to Kyle Allen and decided to transfer. Even though Hill hasn’t been named the starter, he was predicted to be the Big 12 Newcomer of the Year.  Sawyer has played in four career games, completing 11 of 27 pass attempts for 155 yards, two touchdowns and three interceptions. Sawyer is more of a traditional, pocket-passing QB, while Hill’s skill set more closely resembles Trevone Boykin’s, so ultimately, he’ll get the job.

9. Shane Buechele, Texas: With Charlie Strong on the hot seat, I don’t see how he doesn’t choose the stud freshman. We know what Tyrone Swoopes and Jerrod Heard are, and it’s not impressive. Plus, Strong has already admitted he would be willing to start the true freshman in the opener against Notre Dame. We already know that Heard has been taking snaps at wide receiver. So, my guess is that Buechele starts the opener against ND, but will go back and forth on snaps with Swoopes, who may get more time in the red zone (if UT can get there). If Buechele lives up to the hype, he can be something special and help breathe live back into the program. But let’s be honest, how many times have we heard this kind of thing about a Longhorns quarterback?

10. Ryan Willis, Kansas: Willis struggled last season… but honestly, find me a freshman QB that wouldn’t have struggled for the Jayhawks in 2015. It was a thankless task. Willis tossed 9 touchdowns to 10 interceptions, while completing just 52% of his passes. And, the reality is, there is no guarantee Willis is the starter again. Head coach David Beaty, who is now the OC, could opt for the more dual-threat player in Montell Cozart. The KU offense ranked 123rd of 128 FBS teams last season, so there’s no reason to believe it’s Willis’ job. Then again, we know what Cozart is, a QB who immediately looks to run when his first option isn’t there, so I would still ride Willis on the idea of ‘untapped potential.’

What do you think? Where did we go wrong? What did we get right? Leave us your thoughts on the rankings in our comments below!

Should the Big 12 try to own the state of Texas by adding SMU, Houston?
Report: ESPN, Fox Against Big 12 Expansion
To Top