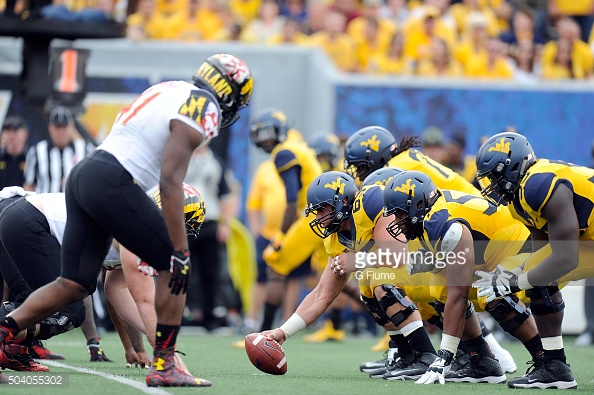 The game of football is a war, and going into battle without a strong, dependable front line leads to defeat more times than not. Any good coach, no matter what position he favors or played back in his heyday, will not hesitate to say that games are won and lost in the trenches. An offensive line is not only just there to protect the quarterback, but also to create lanes for the running game. Whether you call them the “Big Uglies”, “Hog Mollies,” or just fat guys in shoulder pads, these hard-nosed young men are the foundation of any dynamic offense. So as you sit at home or work counting down the days until kickoff, I have countdown of my own for you… Here are, from ten to one, the best offensive lines in the Big 12 Conference.

Someone has to be last on every list, and Iowa State takes the cake with this one. This unit is a huge question mark for the entire team, and while it is nice to have a veteran like Jake Campos in the lineup to provide experience; it takes time to let the rest of the unit build and grow off of this anchor. If you take away Campos, the other four projected starters combine for a whopping total of 1 start! This inexperience will indefinitely be tested when conference play kicks in. Offensive line Coach Tom Manning with have his work cut out for him with this group, and if they do not gel by midway through the season, Joel Lanning’s pocket will cave in faster than you could blink.

Weakness: Left side of the Line, Run Blocking

Kansas brings back a few guys with some playing time from last year’s embarrassing 0-12 season. Some had to grow up quick after being thrown into the line of fire earlier than expected, whether this is a positive or negative will show as the season progresses. After shuffling starting lineups last season, I believe they have finally found five young men who are ready to solidify their respective spots. I fully expect them to lean heavily on the right side of the line with RT D’Andre Banks and RG Jacob Bragg, considering they are the most battle tested lineman on the roster. The left side of the line is a little green, but I think they will do a better job providing running lanes for RB Ke’aun Kinner and protecting Ryan Willis than last year’s group. Whether or not this group is good enough to take over a game remains to be seen, but on the bright side, at least Kansas isn’t last in something football related.

In just his sophomore season, center Dalton Risner is the most accomplished lineman that the Wildcats will field this fall. Even though this group is fairly inexperienced, it is nice to have two senior guards, Will Ash and Teralle Johnson, beside Risner. Ash and Johnson have been in this program long enough and seem more than capable of stepping up to the challenge. It appears that the Wildcats will be starting a freshman at the all important left tackle in Scott Frantz, and a sophomore JUCO Transfer at right tackle in Abdul Beecham. Pass protection is my main concern when looking at the youth in the tackle slots, but Charlie Dickey has done a nice job over the years producing some good offensive lines with some unfamiliar names. Can he work his magic once more? Only Time will tell.

5th year senior Tony Morales will be back after having some injury issues throughout his career, and they could not be more thrilled about this in Lubbock. Put proven LG Baylen Brown next to him, and you have a fiesty one-two punch up front. However, let’s not forget that this is Texas Tech, and starting two freshman tackles in Steele and Akamnonu could spell trouble for this air raid attack. The interior of this line will do a great job in both the pass and run game, so an inside approach may be best for running back Justin Stockton to help keep defenses honest. Patrick Mahomes is s superb athlete, but we may see him escaping the pocket a lot this season if his two tackles don’t quicken their feet, quickly.

Center Kyle Fuller has experienced firsthand all of the turmoil going on in Waco over the past year, and he returns for his senior season as the lone returning starter from a dominant 2015 offensive line. This is 2016, and whether they are ready or not, other members of this line will be tossed into the line of fire, many for their first real crunch time minutes many of these men have seen time in the 3rd and 4th quarter of a blowout game, but can they perform at full go for four quarters against quality Big 12 starters? Losing Rami Hammand certainly did not help this group any, but they have the pieces and offensive weapons behind them to be a formidable bunch if they put in the work. RB Shock Linwood will have a harder time finding holes this season due to all the new faces, but the most important thing will be keeping QB Seth Russell on his feet this season. Jarrett Stidham is gone, so keeping Russell healthy is a top priority for the Bears.

I know what you’re thinking… An offensive line that returns all five starters ranked in the middle of the pack? You bet. The rushing attack, even taking into account the lack of a game changing running back, was nearly nonexistent. The group did a nice job in protecting QB Mason Rudolph, but if you want to win this conference, you have to be balanced on offense. Barry Sanders Jr is the new feature man in the backfield for the Pokes, but none of that will matter and OSU will not be a serious Big 12 contender if the run blocking up front is not drastically improved.

Overall experience is what gets the Horned Frogs into my top 4 with only one returning starter, as almost all of these men saw plenty of action last season due to injury or garbage time. Being in the same system for the past 2 to 3 years bodes well for Patterson’s bunch, as well. They understand what the coaching staff wants them to do, and now they just need to do it. Austin Schlottman saw significant time at center and did a great job filling in when needed. Senior right tackle Aviante Collins has started a few games in the past couple of seasons, but is still in search of that every-down consistency that one needs to be a premier lineman in this league. My main worry with the group is the pass protection skills of the two new starting guards. With the loss of Boykin and gain of pocket passer Kenny Hill, pass protection will be the vital for TCU.

Junior center Jonathan Alvarez will lead this young offensive line. With tackles Orlando Brown and Dru Samia, who performed above expectations as freshman last season, this athletic trio will be key in protecting Baker Mayfield once again this season. The only real issues I have with this offensive line are the two new starting guards Cody Ford and Ben Powers. It does help that they will be alongside veteran Jonathan Alvarez, but will they be ready to go up against some of the best defensive tackles the conference has to offer? More importantly, Ford and Powers need to be good in the run game so the dynamic duo in the Sooner backfield can run downhill. This is a group that could, if everything pans out, be at the top of this list next season.

It is rare that a team has two freshman All-Americans on the offensive line, let alone play next to one another. The Longhorns have just that in LT Connor Williams and LG Patrick Vahe. These two have been a blessing to have for Texas, and show no signs of slowing down their dominant style of play. Senior Kent Perkins will slide inside to RG, where he fits better, which should aid the run game. More importantly, Perkins will be in-between two new starters, true freshmen Zack Shackelford and Tristan Nickelson. If Shackelford can step up early and make calls on the line that don’t reflect those of a true freshman, this group could be in the discussion as tops in the nation. The most important piece to the puzzle is RT Tristan Nickelson, as solidifying this spot will prevent inserting another true freshman in the rotation. This young group, much like Oklahoma’s, may rank atop this list come next season.

There is a lot to love about this offensive line. Experience, grit, attitude, toughness… this unit has it all. It starts with senior center Tyler Orlosky along with guards Adam Panky and Kyle Bosch, a trio of absolute road graders, who helped West Virginia become one of the most potent rushing attacks in the Big 12. The two tackles Cajuste and Lazard both did a nice job last season. Cajuste, looks to progress on his impressive true freshman season, and should have no problem doing so. Lazard stepped in at RT and did some good things as well, but if I had to choose one area of unease it would be Lazard playing a solid full season at RT. This is an NFL caliber offensive line, and a group that is not only the best in the Big 12, but maybe in the entire country.

Oklahoma Sooners must avoid SEC temptations
Podcast: Why is the Big 12 interviewing 17 teams?
To Top