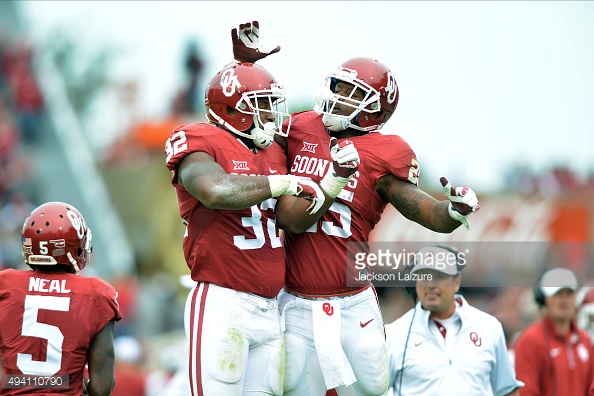 10. Justin Stockton, Texas Tech Red Raiders: Stockton takes over for the departed DeAndre Washington who is now with the Oakland Raiders. While QB Pat Mahomes gets the headlines, don’t sleep on Stockton, who will be needed to help keep the offense balanced this fall. If you recall in 2015, Stockton made some huge plays that helped keep Tech in their near-upset against TCU. He averaged over 8 YPC as a freshman with 6 YPC last season. Despite playing in a spread, coach Kliff Kingsbury has made a commitment to a 60-40 ratio in the air vs. ground game, so expect Stockton to break out this fall and become a household name in the Big 12.

9. Chris Carson, Oklahoma State: Sure, it’s entirely possible that Carson’s OSU career ends up as a bust and Barry Sanders Jr. takes the starting role and runs away with it. I have a hunch that isn’t going to happen. Carson came to Stillwater with high expectations and really built his own hype. He transferred from Butler Community College and last year said his goal was to rush for 1,000 yards and be top 3 in the Big 12 in rushing. Obviously, none of that happened. Carson led the team with an unimpressive 517 yards, but much of it was due to suspect offensive line play. As the line improves, Carson gets pushed and motivated by Sanders Jr., Rennie Childs, and Jeff Carr, then maybe he can have that breakout season so many expected in 2015.

8. Shock Linwood, Baylor Bears: Linwood is the other half of an excellent backfield duo in Waco. He’s coming off foot surgery from earlier in the offseason, but based on the juke moves he’s flashing in practice, it doesn’t look like the foot should be much of an issue (see below). If Johnny Jefferson misses extended time (see more in #6), then Linwood will be the featured back and could end up with an even bigger season than predicted.

7. Kyle Hicks, TCU Horned Frogs: Hicks is a do-it-all back and is looking to make major strides as the starter this fall for TCU. Last season, Hicks finished third on the team with 262 rushing yards, but was second leading receiver out of the backfield with 13 catches for over 100 yards. He averaged a very efficient 4.8 yards per carry last season. Plus, with the loss of QB Trevone Boykin, and some uncertainty surrounding Kenny Hill and Foster Sawyer, Hicks could get even more touches than a running back traditionally would in the Sonny Cumbie-Doug Meachem offense.

6. Johnny Jefferson, Baylor Bears: There really are three great RB duos in the Big 12. Mixon-Perine, Foreman-Warren (unfortunately I left Warren off the list, but just barely), and Baylor’s Johnny Jefferson and Shock Linwood. Currently, Jefferson on the sidelines with a rib injury suffered during a recent car accident. He could be out for the team’s opener against Northwestern State, but frankly, that’s not a big deal. Jefferson is better off getting healthy, because he will be invaluable for BU as the Big 12’s best in yards per carry in 2015, ranking in the top 5 in the country.

5. Joe Mixon, Oklahoma Sooners: Mixon will once again be the change-of-pace back to Samaje Perine. He’s a bit more slippery, and better catching the ball out of the backfield (28 catches last season, 4th on team). With a largely unproven group at WR, I think Mixon could see even more catches out of the backfield or even more time spent in the slot. Talent-wise, Mixon is top 3 in the Big 12, but, he still is playing second fiddle to Perine, therefore he has to drop a couple notches.

4. Rushel Shell, West Virginia Mountaineers: Now speaking of offensive lines, there is none better in the Big 12, and maybe the country, than West Virginia. Shell replaces Wendell Smallwood, who is starting his NFL career in Philadelphia with the Eagles. Shell does not have elite speed, but behind that line, with something to prove as he looks to live up to the hype, I believe Shell is in for a huge season. Shell will be pushed by freshman Kennedy McCoy and JUCO player of the year Justin Crawford. But, if he uses that competition as motivation, the senior is long overdue for his breakout campaign.

3. Mike Warren, Iowa State Cyclones: Warren was the Big 12 Freshman of the Year in 2015, but could be held back in 2016 by a sketchy offensive line. It was announced on Monday that the only returning offensive lineman, Jake Campos, is out indefinitely with a leg injury. So, Warren, who struggled to find the end zone last season (5 TD’s) is likely to have more trouble this season. Still, he was the league’s 4th leading rusher last year on a sub par team. Plus, new head coach Matt Campbell prefers a run-heavy scheme. Can he pull that off with this group up front?

2. D’Onta Foreman, Texas Longhorns: Foreman is probably the most underrated offensive player in the Big 12 heading into the 2016 season. For some reason the national media is not giving him the credit and props he deserves. Foreman averaged over 7 yards per carry last season, which was the second best in the conference. Plus, Foreman is running behind an offensive line that has another year of experience. Also, according to PFF College Football, Foreman led the Big 12 in breakaway percentage.

1. Samaje Perine, Oklahoma Sooners: This one is a no brainer. Perine has rushed for over 3,000 yards as he heads into his third (and likely his last) season in Norman. Perine needs just 1,057 more yards to break Oklahoma’s all-time rushing record. That’s beyond impressive considering some of the ball carriers that have worn the Crimson and Cream including Billy Simms, Joe Washington and Adrian Peterson. If it weren’t for Lincoln Riley’s pass-heavy offense, along with Joe Mixon taking away a few reps, Perine would be near the top of the list in the Heisman discussion.