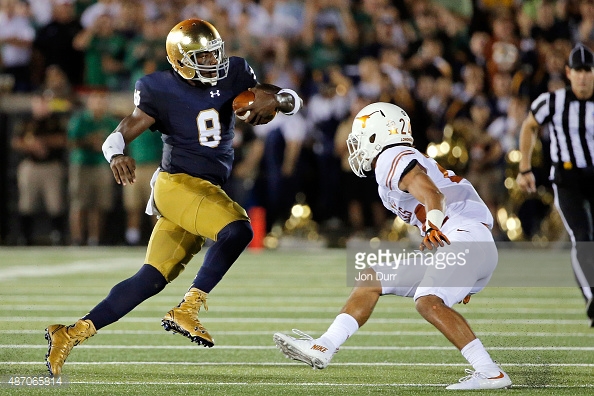 With Texas and Notre Dame playing each other in the opener for a second straight season, coincidentally, both teams come into the season with a decision to make a quarterback. Well, it looks like Notre Dame coach Brian Kelly has made that decision, at least for the game against the Longhorns.

Brian Kelly: “It’s easier to just play one. My job is to win, and my belief is playing both of them gives us a better chance of winning.”

Brian Kelly on what changed in deciding to play both QBs instead of one: “These two guys are too good.”

So, the Irish have decided on its QB … sort of. Charlie strong, your move.

But, the decision is different. Brian Kelly could not go wrong with either choice. Charlie Strong is basically picking between two flawed candidates, Tyrone Swoopes and Shane Buechele.

The longer this QB battle drags on, the more I wonder if Swoopes may ultimately get the nod. I keep hearing that Swoopes appears to have a really good grasp on the new offense and seems more comfortable than ever. Is this setting up to have Swoopes under center against ND? Is Buechele looking like that much of a freshman so far in camp?

My preference would be to go with Buechele as the starter and then keep the Swoopes 18-wheeler package for red zone situations. If Buechele struggles mightily, then see what Swoopes can do in his senior campaign. Other than that, UT fans should cross their fingers and pray the defense can be as good as advertised!

Who do you want to see under center against Notre Dame? Drop us a note in the comments!