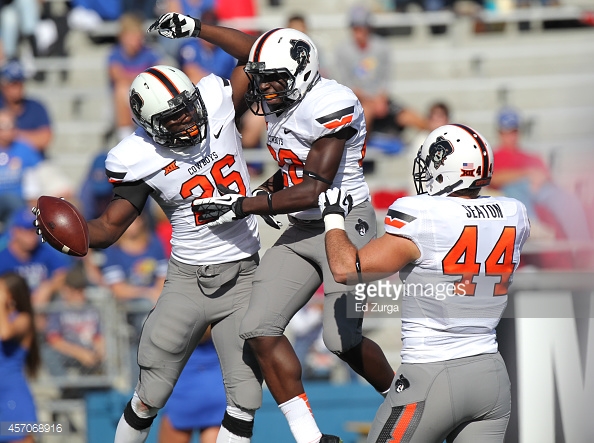 “Electrifying offenses,” “high scoring shootouts,” and  “crazy pass happy league” are common phrases that are often stated when one talks of football in the Big 12 Conference. Most won’t argue that the quarterback is the single most important position on the field, but without wide receivers, even the golden boy of the offense wouldn’t be the king of the campus. Like a point guard needs a power forward to complete a rim rocking alley-oop,  a quarterback needs a playmaker at the wide out position to haul in anything and everything from a screen pass to a back shoulder fade that eludes the defenders hand by fractions of an inch. You may consider them the “divas of the gridiron,” but that does not decrease the value of their presence on the field. These young men are the reason defensive coordinators lose sleep at night… the reason that you spill your beer and nachos all over the family in front you when a 5 yard slant turns into a 70 yard race for the end zone. So fans, hold onto your beverages, and defensive coordinators, close your eyes as I countdown from 10 to 1, the top 10 wide receiving corps in the Big 12.
​

Star: 6’5 Junior Allen Lazard
Freshman to watch: 5’9 Deshaunte Jones
Weakness: Veterans need to help out Lazard. (Trevor Ryen and Dondre Dailey)
After leading the Cyclones in receptions, receiving yards, and receiving touchdowns in 2015, Allen Lazard has cemented his position as the go-to man at Iowa State and will undoubtedly be the safety net for Joel Lanning this season. Unfortunately, with Trevor Ryen and Dondre Dailey having underperformed during their time in Ames, he remains the ONLY proven, reliable option for Lanning. If these two cannot step up in 2016, Matt Campbell and his staff will have to rely on younger, inexperienced bodies. 6’6” big man Hakeem Butler should see the field more this season after being redshirted last season, while sophomores Carson Epps and Darius Lee-Campbell add depth, but not necessarily experience, to this group. Defenses will key on Lazard, and he will likely see a top cornerback each week, so having a young set of hands step up and make plays on the opposite side will be the key for Iowa State this fall.
​
9. Kansas

Star: 5’10 RS Junior LaQuvionte Gonzalez
Freshman to watch: 6’2 Evan Fairs
Weakness: Younger WRs need to take next step (Jeremiah Booker, Steven Sims Jr., and Tyler Patrick)
​ The Texas A&M transfer LaQuvionte Gonzalez is finally eligible to play this fall, and for the Kansas faithful, he couldn’t come at a better time. Gonzalez is a true speedster and he showed it during the Kansas Spring game. Although his numbers at A&M aren’t too impressive, he is the clear cut best target for this team. Kansas does not have time for guys to sit and learn, they need guys who can play right away. This unit is very young and it showed at times last year. Guys were forced into action early because they had no other options and when your 0-12 why not get some youngsters some playing time. Stephen Simms Jr. is another quick wide out to help out Gonzalez, and fellow wide receiver Jeremiah Booker is a much needed big target on the outside. Both Simms Jr. and Booker will need to mature and take another leap forward to help out quarterback Ryan Willis or else Kanas will be in for another long painful season.

We stay in the sunflower state and leading the pack for the Wildcats, is Byron Pringle. I expect great things from Pringle this season as he was my Newcomer of the Year pick for the 2016 season. He showed exactly why he will be on everyone’s radar this fall, especially in the Kansas State Spring game. This guy is an absolute thoroughbred and will be an X Factor for this offense, which was searching for answers in 2015. Joining him will be Senior Deante Burton who had a nice junior campaign as well as Sophomore Dominique Heath. Rounding out this position is RS Freshman Isaiah Zuber and true freshman Corey Sutton, who will see their first collegiate snaps in 2016. This is probably the smallest wide out group in the Big 12 but they will pack a nice punch for Bill Snyder.

The Texas track star John Burt is the man paving the way for this young group. Even though he is a sophomore himself, Burt was the best target as a true freshman for the Longhorns had in 2015. Look for Junior Armanti Foreman to produce as well, as being opposite Burt will allow him to see a lot of single coverage. Jacorey Warrick and Lorenzo Joe are the most experienced but that won’t mean much because the Longhorns brought some intriguing young freshmen from their latest recruiting haul. 6’6 Collin Johnson has already been penciled in as a starter and will be another big target for fellow freshman quarterback Shane Buechele. Devin Duvernay is another freshman name to keep an eye on, as he may be the fastest man on the field week in and week out, regardless of the opponent. The installation of the spread offense should lead to plenty of meaningful snaps for all these freshman.

With Sterling Shephard now catching passes opposite Odell Beckham Jr., the Sooners are looking for a new workhorse on the outside to compliment the two that the team will lean on out of the backfield. Dede Westbrook is this workhorse. Westbrook proved to be a reliable option alongside Shephard last season, and is ready to take over as Baker Mayfield’s top target. 6’5 RS sophomore Marl Andrews provided a much needed red zone threat in 2015 and will look to do so again for 2016. Penn State transfer Geno Lewis will help contribute for Oklahoma and will bring some veteran grit to this group, so the likes of A.D. Miller, Jarvis Baxter, and Dahu Green can help out.  Jarvis Baxter is a senior and will certainly need to play like one or else sophomores A.D. Miller or Dahu Green will be counted on more often. This unit has a nice balance of experience and youth, but it is time for the youth to become experienced to find out if they sink or swim.

Losing arguably one of the best receivers in Big 12 history, stat wise, via Corey Coleman will undeniably hurt offensive production, but KD Cannon is ready to prove that he can be the next touchdown machine in Waco. He has great speed in an offense that likes to utilize it on the outside by taking deep shot after deep shot, and returns this season with more career yards than all other wide outs combined. 6’4” RS sophomore Ishmael Zamora is a big target, and RS senior Lynx Hawthorne will provide another viable threat for Seth Russell. Behind these three is where the question marks lay, as Chris Platt and Quan Jones need to produce for the Bears offense to reach new heights. Pooh Stricklin will look to help out as well after redshirting in 2015, as Kendall Briles will find creative ways to get the ball into the hands of all weapons at his disposal.

Shelton Gibson can elude defenders, return kicks, catch touchdowns, walk your dog and paint your front porch. He is THE man in Morgantown, and can turn nothing into something every time the ball is in his hands. He is not alone though as senior Daikiel Shorts Jr. provides a nice compliment to Gibson as well. The quick feet of sophomore Jovon Durante was impressive enough too real in five scores last season and become a fixture in the starting lineup as a freshman. Sophomore Gary Jennings will bring some height to the mix at 6’2 and could be an end zone threat. There are two in particular in the group that need to answer the call, in Ka’Raun White and Devonte Mathis. Both now have been in this program for four and in Mathis’s case 5 years. This offense is missing that physical threat that Kevin White had in 2014. It took awhile for Kevin to step up but, when he did this air raid attack was a thing of beauty. The question is can his brother Ka’Raun step up like he did and make this unit complete.

Star: 5’9 Sophomore KaVontae Turpin
Freshman to watch: 6’1 Isaiah Graham
Weakness: Keep healthy and all need to take a step forward as a whole.
No Josh Doctson? No problem. This group has talent and experience, with the jaw dropping KaVonte Turpin leading the charge. Deante Gray and Ty Slanina are returning from injuries and will provide leadership to the young studs below them, while hoping to also return to top form themselves. Of these studs are transfers Taj Williams (Butler CC) and John Diarse (LSU), as both should prove to be good targets for new Frog QB Kenny Hill. 6’6” Jaelan Austin and 6’4” Emanuel Porter are big bodies that will not only allow Patterson’s offense to stretch the field, but also to convert in the red zone, where wing span and catch radius is vital. Doctson will be missed, but Doug Meachum and Sonny Cumbie will not lose any sleep over his departure, as this core arguably is the deepest in TCU history.

Much like TCU, the Red Raiders lose their number one option from the 2015 season in Jakeem Grant. However, in this air raid attack, Tech always relies on numerous wide outs with big play ability. If Devin Lauderdale can stay in Kilff Kingsbury’s good graces, he is destined for a breakout season. Reginald Davis III provides Patrick Mahomes with a deadly one-two punch, and the shifty Ian Sadler in the slot makes defenses cringe even more. If 6’3” Dylan Cantrell can stay healthy this season, this unit could make Mahomes part of the list of stat hogging quarterbacks that have gone through Lubbock.  Some new faces on the roster that may have to do some adjusting to this level of play are Derrick Willies (#1 JUCO WR) and DeQuan Bowman (#8 JUCO WR). If these two can pick up the faster style of play sooner before later, the rest of the Big 12 should be on high alert.
​

James Washington had a breakout sophomore season, and there in no reason he should not be able to build on that and make his way up the list as one of the top receivers in the nation this fall. He led the league in touchdowns, and is the only man in the conference returning from a 1,000+ yard season. 6’4” Marcell Ateman is his primary partner in crime, but is expected to miss the first month of the season with a foot injury. If he returns healthy, this duo will be the deadliest in the Big 12. Jhujuan Seales and Jalen McCleskey will have to step up during Ateman’s absence, and showed flashes last season that they are ready to handle the duty. Also in the group are Chris Lacy and Austin Hays, who may also find themselves playing meaningful snaps early in the season. If Seales can reach his full potential this season, this has the makings of a three headed monster, also featuring Washington and Ateman, that would be arguably tops in the nation. The talent is there, it will be up to these young men to showcase it week in and week out.
**If you want a chance to win FREE Big 12 gear from your favorite team, be sure to sign up for our weekly newsletter! **