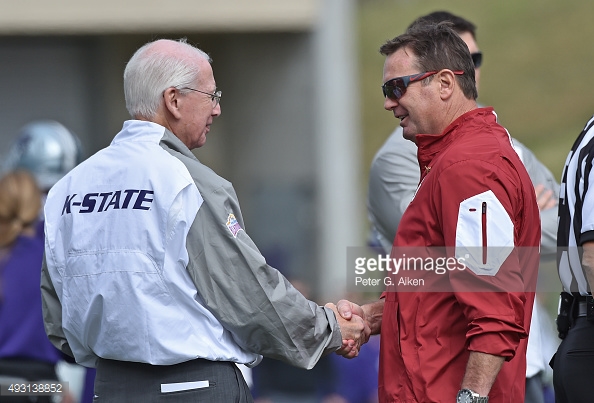 Since the latest round of conference realignment, one of the rallying cries for the Big 12 Conference has been the same one from the great, late Rodney Dangerfield, “I don’t get no respect!”

Well, all of that can change in the first month of the season when Big 12 teams face their toughest non-conference schedule in years, with games against Houston, Notre Dame, Iowa, Ohio State, Stanford, Arkansas, Arizona State, Cal, Pitt, BYU, and Missouri.

Sure, Baylor still plays their softball schedule, but, teams like Oklahoma State and K-State are stepping up their game a bit more than usual. The Cowboys will play Pittsburgh, which is the perfect type of out-of-conference match up. It’s against a Power 5 team, but not a power house, and gives the Pokes a good chance to gauge where they are as a team early in the season. Meantime, Kansas State seems to go back and forth every other year, between a cake walk out-of-conference schedule, and trying to throw in a solid Power 5 game. Two years ago, the Wildcats faced Auburn, last year, the slate included South Dakota, UTSA, and Louisiana Tech. This season, K-State opens their season on Friday night September 2nd against Stanford. Awesome.

So, IF the Big 12 wants to get the respect they are so desperate for, they have plenty of opportunities during the month of September. These games will be watched by not just Big 12 fans, but millions of college football fans, looking to see where exactly the Big 12 stands in terms of Power 5 conference hierarchy.

So, as a result, the first month of the season becomes one big job interview for the Big 12 conference. With the Big 12 facing expansion, what does that mean in terms of adding either two or four teams in the future? Well, the selection of teams could change or be modified based on what is perceived as the conference’s strength and health.

People want to be around and a part of other successful people and organizations. If the Big 12 has a super successful non-conference slate, maybe teams like Arizona, Arizona State, and Missouri have more interest in either leaving a Power 5 to join, or in Mizzou’s case, getting back into the Big 12.

On the other hand, if the Big 12 gets smoked in some of these higher profile non-conference games, than the Big 12 will continue to look, in some people’s eyes, as simply the intermediate conference between the other Power 5’s and the Group of 5.

Often times we will cite a conference’s record in bowl games to determine the various conference hierarchy amongst the Power 5 conferences. Example, last season the Big 12 went 3-4, while the SEC went 8-2. Two years ago, the SEC only went 7-5, but the Big 12 was a very disappointing 2-5. Now, as we have pointed out in the past, bowl games may not be the best indication of a conference’s quality, mostly because it is hard to judge motivation. Some teams have a heartbreaking end to their regular season and might just mail it in during bowl practices and the game. Others might be looking to prove themselves on the biggest stage (Houston vs. Florida State last season).

But, in September, every team is in it, and motivation should be as equal as possible, across the board. There is no reason or excuse to not “be up” for a game this early in the season. So, if there is ever a chance for the Big 12 to go out and remind America that the 5-9 bowl record over the past two seasons was a fluke, this is it. The next four weeks. Will the Big 12 thrive? Or will it flounder? Will they prove they are worthy of really being one of the ‘big boys’? Or, is this just a conference with two massive brands in Texas and OU, plus others.

The next month can change the entire direction of the Big 12. Originally, conference expansion was supposed to be decided by the start of the season. That has now been pushed back to late September or October. The Big 12 could end up severely regretting the decision to delay expansion … or it could be the best thing to happen to this conference in nearly a decade. Time, and results on the field, will tell.