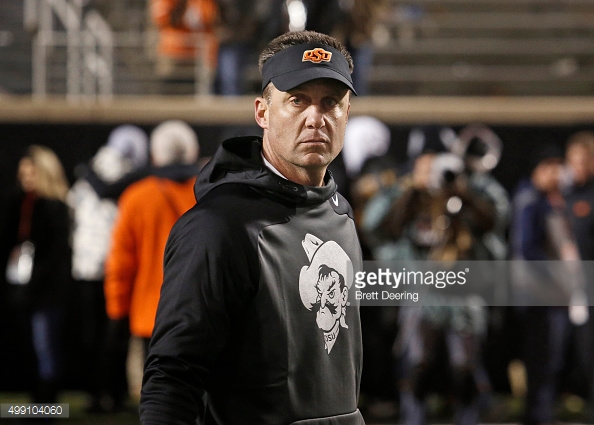 Before last season, the hopes of Oklahoma State football fans were high.  After a great start, going 5-1 with the loss being by 6 points to the defending National Champions, the Cowboys ended up having a pretty terrible year in 2014.  With no running game and a slew of injuries, the sky had fallen and the Pokes had slipped to a 5-5 record before Mike Gundy and staff yanked Mason Rudolph out of redshirt to save the season.  That team finished 7-6 after a hard fought game in Waco in Rudolph’s first college game action, a crazy OT win in Norman (the re-punt call from Stoops will always live in infamy), and a nice bowl win over a decent Washington Huskies team who’s defense was loaded with future NFL talent.

Going into 2015 the Sea of Orange was pretty excited.  They had their numero uno in Rudolph, an extremely hyped JUCO running back coming in Chris Carson, and the young defense was finally growing up.  Despite the fact that the season ended up pretty good, 10-3, 2nd in the Big 12, and a Sugar Bowl appearance, there were many flaws.  The emergence of Emmanuel Ogbah and James Washington as stars, along with concrete proof the Rudolph was the future at QB were both great, but it became obvious the running game problem couldn’t be solved by Carson … because, well, it wasn’t a running back problem.  The offensive line, while being pretty decent at pass blocking, couldn’t run block at all.  Give the coaching staff credit for being creative with back up QB JW Walsh to get yards on the ground when needed, but without a true run game to help sustain drives the offense either punted quickly or scored quickly behind Rudolph’s big arm, never allowing the defense any rest.  A unit that was starting to be considered one of, if not the best, in the conference around mid-season quickly lost its legs.  After leaning on the defense while the offense stumbled to start the year OSU started having to win close games with its firepower, coming back from 17 down against both TTU and ISU.  They players fought hard but were noticeably gassed at the end, with Baylor and Oklahoma both mauling the Pokes on offense.

So here we are a week or so away from the 2016 campaign and again the feelings around Stillwater, OK are very optimistic.  Head coach Mike Gundy is loose and confident, which is usually a good sign.  I’d like to play cards against Gundy because he has no poker face.  If he thought the team was going to be terrible there’s no way he’d still be growing the mullet, no matter how much the team likes it.

I understand the good feelings. Rudolph has a full season under his belt. He had a great 2015 season with 3770 yards and 21 TDs, while missing an entire game and giving up a ton of snaps to the Walsh package. Now, he’s coupled with the Big 12’s best receiver group, so the sky is the limit for the passing game.  The defense lost All-American DE Ogbah and All-Big 12 corner Kevin Peterson, but is otherwise pretty loaded.  Breaking in new defensive ends is made easier by Oklahoma State actually having quality depth at defensive tackle for once, and questionable depth at the corners is made easier by having a nice group of rangy linebackers and maybe the best safety duo in the Big 12.

But an old problem may still linger. That running game is a giant question mark for the 3rd-straight year.  Can the offensive line improve enough to not make the rushing attack an obviously liability?  With the ability of Rudolph and the pass catchers the offensive line only has to be average for the offense to be deadly.  Those amazing stats from Rudolph previously mentioned were with no threat of a running game.  He routinely threw against 6, 7, sometimes 8 dropping back into coverage, making those stats that much more impressive.  If the running game can muster just 130-150 yards a game (which isn’t great) defenses would actually have to pay attention to it.  Ask TCU how much of a deep threat James Washington is, then imagine adding play action to that equation.  Rudolph should become the second Oklahoma State quarterback to pass for 4,000 yards in a year (Brandon Weeden did it twice) and might even sniff 5,000 if things go really well.

Cowboy fans are hoping Stanford transfer Barry J Sanders is the second coming of his father to rescue the rushing attack.  He’s not.  No one ever will be Barry Sanders again.  Plus he is a different style of runner, he’s bigger and taller and much more a one-cut-and-go-style compared to his father’s jitter bug style.  He and Carson are very similar in that regard, along with the fact that they are both excellent pass catchers out of the backfield.  OSU’s running backs aren’t bad.  Carson and Rennie Childs are both quality backs, and sophomore speedster Jeff Carr is going to surprise some people this year with screens and reverses.  The young Sanders will add some depth to a solid group, but the burden to everyone else seeing that the backs aren’t terrible falls on the tackles and guards and the center.

The Big 12 is as open this year as ever.  The Sooners are the Big 12’s obvious big dog once again, but they have some defensive rebuilding to do and a brutal opening month.  If a few losses happen early it could wreck OU’s confidence.  TCU looks to be solid again, but it’s hard replacing a star as bright as Boykin, and Baylor is still loaded but no one has any idea how the Bears will play following the fiasco that was their off season.  Pat Mahomes is just plain frightening and makes Tech scary even if they can’t play a lick of defense again.

If OSU can run at all they could easily compete for the Big 12 title and a playoff spot.  10-2 or 11-1 isn’t that much of a reach for this team, with 12-0 being a possibility with some luck and a Sooner meltdown.

But if they can’t run?  OU, TCU, Baylor, and Texas Tech could easily be losses if the offense falters.  An improving Texas team come to Stillwater, and the home team has lost the OSU/Texas game for years now. WVU is always tough, ISU still gives Poke fans nightmares 5 years later.  Basically 8-4, hell even 7-5, is a really possibility for this year’s squad.

It all depends on the big guys up front.