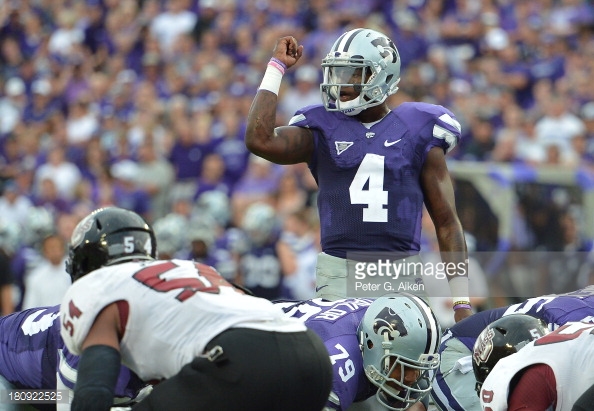 Former Kansas State quarterback Daniel Sams was arrested over the weekend for his alleged connection and involvement with a home invasion where a man was killed in Lake Charles, Louisiana, according to multiple reports.

Two other Lake Charles men were reported as arrested in the case August 21. Jacolby Cunnigan is the accused killer, while Brandon Davis is charged with armed robbery and home invasion. Cunnigan’s bond is $1.4 million and Davis has a $700,000 bond.

In a bizarre twist, one of the men killed during the invasion was former McNeese State defensive standout Aaron Sam, who Sams tweeted about soon after his death was announced.

Hands down one of the most passionate players I’ve ever played with. Used to always say, glad he on my team. RIPSAM?pic.twitter.com/RGUV8vCKrt

Sam went on to retweet several different people sending and giving their condolences to Sam.

Rest in Paradise…. I miss you already my dawg! Tears don't even ease the pain…. I love ya big brudda! Fly high?? pic.twitter.com/p9SpsAXA5d

Sam has tweeted since the alleged homicide, a message that may, or may not be about the case:

Every mistake is a lesson

The investigation is described as ongoing.

Sams is originally from Louisiana and played quarterback for the Wildcats from 2011-2013, where he spent time as a backup to Heisman candidate Colin Klein. Sams briefly moved to receiver with K-State before transferring to McNeese St. to play quarterback. Sam was very productive last season in Lafayette, starting all 11 games, throwing for 1,666 yards and 13 touchdowns, along with 11 rushing touchdowns.