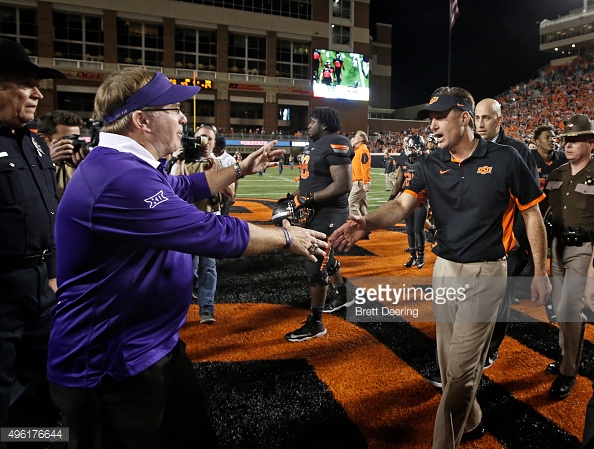 Since we’re just days away from starting the Big 12 2016 football season, why not go ahead and take a look at our ten must-watch games heading into the season. We mixed in some non-conference games with some conference match ups. OU haters beware: yes, they show up a lot on this list, partly because of their two massive non-conference showdowns, along with the fact they are a the preseason favorite to win the conference. Please, don’t hate us for this. And if you do, tell your AD/head coach to go schedule a decent non-conference slate. It ain’t that tough!

10. Kansas State @ Stanford (Sept 2): Can a team projected to finish near the bottom of the Big 12 play with, or dare I say, beat, one of the Pac-12’s best? In fact, The Cardinal was the preseason media pick to win the conference. It would be a huge statement game, not just for the Wildcats, but for the entire Big 12. Plus, with this game on Friday night, it will, and should, get more attention than it would stuck on Saturday and overshadowed by the other big-time showdowns on the schedule.

9. Notre Dame @ Texas (Sept. 4): If this game goes anything like last season’s 38-3 Irish massacre, Charlie Strong might see all his belongings packed in a box on his desk when he arrives back to his office after the game on Sunday night. I don’t expect that, but it is a fascinating opening test for the Longhorns. Will this team show signs that they are close to turning the corner? Or will it be more of the same disappointment as recent seasons in Austin? Of course, the starting QB question remains for UT, but also, what does the new offense look like under new OC Sterlin Gilbert? I can’t wait to find out.

8. TCU @ Texas (Nov. 25): This game has so much intrigue for a multitude of reasons. First off, what is on the line at this point? Is TCU making a push for the CFB Playoff? Are the Longhorns the surprise of the Big 12 and potentially battling for a conference title? Are both teams in the race? If the chips fall right, this could be a classic. The one will be all about the mighty public school trying to retake ground for the tiny public school that has become it’s own juggernaut in the Big 12. Of course, there is also the storyline of TCU Co-OC Sonny Cumbie turning down the same position at Texas. No doubt, these two programs don’t care for each other, and while it’s not the old staple of UT-A&M on Thanksgiving, this one will help ease the pain of losing that game.

7. Oklahoma State @ TCU (Nov. 19): If the Sooners don’t live up to expectations, these will be the two teams fighting for the Big 12 title. Maybe this game turns into the de facto Big 12 title game in late November? Either way, one of these two teams could be in line for a trip to the Sugar Bowl and will be looking to make a late-season statement as they hit the home stretch of the season. How does the 1-2 combo of Mason Rudolph and James Washington do against the great secondary at TCU?

6. Oklahoma @ Texas Tech (Oct. 22): Baker Mayfield makes his return to Lubbock where he was a walk-on to start his college career. There’s no doubt he will be animated, and possibly vocal, heading into this game. But, we know that Pat Mahomes and Kliff Kingsbury want to show and prove that they have the best signal caller in the Big 12. If Tech gets off to a hot start to their season and can pull off this upset, they would launch themselves into the national discussion, while Mahomes might that ‘Heisman moment’ that every candidate needs during a season.

5. Oklahoma @ Houston (Sept. 3): This is arguably the biggest game of Week 1 in the country. Every Power 5 program that thinks they have a shot at the Playoff should be rooting for OU on Saturday. If Houston wins and then runs the table, they will have a strong case to be a Group of 5 CFB Playoff crasher. Meantime, Oklahoma will have zero chance of making the playoff of Houston wins this game and runs the table. Between no conference title game and a loss to the Cougars, OU could kiss their playoff hopes goodbye with a loss on Saturday.

4. Texas vs. Oklahoma (Oct. 8): This year’s version of the Red River Rivalry could have so many different storylines. If Texas gets off to a surprisingly good start, they could really make their “we’re backkk!” mark with a second straight win in this rivalry. Remember, this game was Oklahoma’s only loss last season, so they will be looking for revenge. But, this game is placed in a very difficult spot for OU, one week after a road game against TCU. With a win here, OU will have gotten through a grueling stretch to start the season and will see the schedule lighten up after this game, with 3 of their next 4 against K-State, KU, and Iowa State.

3. Oklahoma vs. Ohio State (Sept. 17): Wow. Kudos to both Universities and programs for letting this game happen. This is so good for college football. While the playoff implications are not nearly as high as OU-Houston (simply because both could still make the CFB Playoff with a loss in this game), it does not get any bigger or better than these two schools on the same field in September. Urban Meyer – Bob Stoops, Gaylord Family Oklahoma Memorial Stadium, awesome. The best part is, they’ll do it again next season … in the Horseshoe!

2. Oklahoma State @ Oklahoma (Dec. 3): Bedlam may very well, once again, be the de facto Big 12 Championship Game. It was last year and the Sooners smoked the Pokes 58-23. Now, in a perfect world, these two teams would go into this game undefeated and it would essentially become a quarterfinal game for the CFB Playoff. Regardless, with Texas being down, and Stoops/Gundy having such lengthy tenures at their respective universities, this has quickly become the best rivalry in the conference.

1. Oklahoma @ TCU (Oct. 1): The Horned Frogs are picked by some to be a dark horse to win the Big 12. If so, they’ll have to get through the Sooners in early October. Where will OU be at this point? 3-0 and flying high towards another potential playoff appearance? Or, are they 2-1, or dare I say … 1-2, and desperate to turn over a new leaf with conference play here. Does Kenny Hill put himself back into the national picture with a win against the mighty Sooners? It very well could be, and we hope it is, a battle between two top ten teams in Fort Worth.