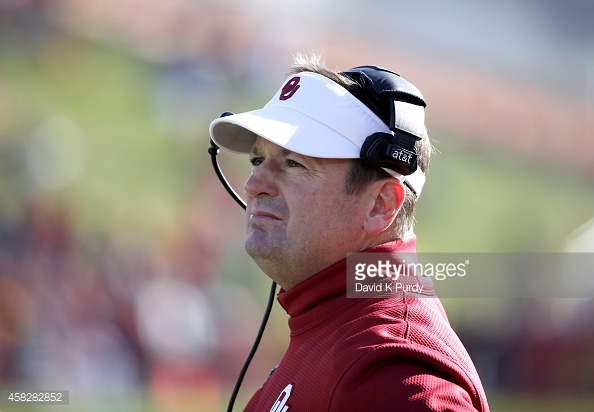 What happened to the Sooners yesterday was an embarrassment to the team and the conference.

OU looked like a squad that spent the offseason buying into their own hype and looking ahead to Ohio State, while Tom Herman and the Houston Cougars understood the importance of this game for their hopes of making the College Football Playoff in December.

Here’s the deal: If Houston runs the table, they’re in. I don’t want to hear about the Group of 5 argument. This is a helluva football team that will also play a quality Power 5 team, Louisville, later in the season.

The only chance an undefeated Houston misses the playoffs is if there are four other undefeated teams from Power 5 conferences, which we know is very, very unlikely.

But, back to OU: I said several times before the season I was not buying their hype as an insane 2/3 favorite to win the conference (put down $300 to win $200). There were a slew of pieces missing on defense, new faces on the O-line, and a group of unproven wide receivers.

Everyone saw a Heisman contending QB returning to a team that made the playoff with a loaded backfield. That’s all well and good. But, how might last season have been different if Baylor had Seth Russell and TCU had Trevone Boykin when each team played OU? We’ll never know. But, that is an overlooked point from 2015 that preceded the shellacking Clemson handed the Sooners.

Before we address how the Sooners can actually make the College Football Playoff, let’s ask the very fair question of: from what you saw yesterday, what makes you believe OU can run the table from here? We know there is no shot of a 2-loss Big 12 team making the playoff, especially since there is no conference championship game.

The defense was leaky, most notably the secondary. Think that’s a good thing to have in the Big 12 world of spread ’em out offenses? QB Greg Ward Jr. had his way for Houston, throwing for 321 yards and two touchdowns.

Then, there was the OU offensive line that saw Baker Mayfield running for his life far too often, couldn’t stop 5-star freshman DT Ed Oliver, and only helped the fantastic RB duo of Samaje Perine and Joe Mixon rush for a combined 71 yards.

And the mental mistakes by the Sooners? Maybe even more disappointing. The ‘kick six’ by Brandon Wilson was preceded by an Oklahoma timeout. How does the coaching staff not go over the possibility of this leading up to the play? Bob Stoops did not have his team prepared for this game, while Tom Herman’s team had more energy, intensity, and focus than the Sooners.

So, how does OU make the playoff from here? Well, win out for starters, and get some help. Let’s assume, which I think is fair, at least one team from the SEC and the Big Ten will get in. That leaves two spots for a Big 12, Pac-12, ACC and Group of 5 team.

At this point, I would bet that the Houston Cougars will be in the 4-team playoff. This is not a run-of-the-mill Power 5 victory for a Group of 5 school. This was a Houston squad that won the Peach Bowl over Florida State to end last season, and started this season with a convincing win over a team that was in the College Football Playoff last season.

If Houston runs the table and either Florida or Clemson win the ACC with just one loss, then OU is out. That’s it. And if the committee puts a 1-loss OU in over a 1-loss Houston, then the Cougars have every right to be infuriated. Houston will have played a solid AAC schedule with really good out-of-conference games against Oklahoma and Louisville.

The best case scenario for Oklahoma goes as follows: Houston finishes with 1 loss, to Louisville, which knocks them out of the playoff picture. Oklahoma runs the table from here on out. Ohio State wins the Big Ten (they play OU in two weeks). Oh yea, and the Big 12 proves to be a quality conference with a lot of depth. Then, maybe the Sooners can miraculously work their way back into the playoff picture.

The thing is, all this hinges on one main thing that has to happen before any of the other pieces fall into place: OU winning the rest of its games. Frankly, based on what I saw yesterday, there’s no chance that’s going to happen.

Sorry, OU fans, if you’re hope was a return to the College Football Playoff, you might want to look ahead to 2017.