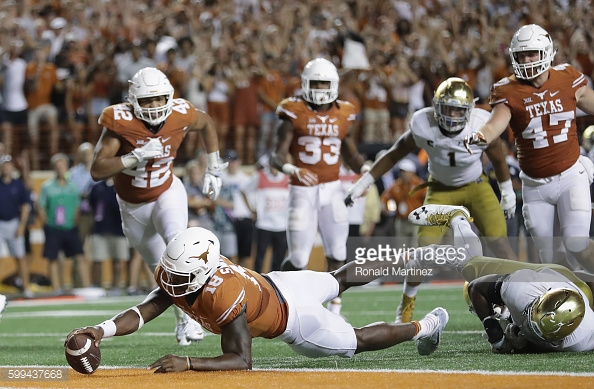 But, let’s be honest, the Big 12 is the conference that the powers that be across college football are looking, digging, and begging to find issues with. Right now, the Big 12 is the redheaded stepchild of the Power 5 conferences. Many believe there will eventually be just four power conferences, with the Big 12 becoming the odd man out, or just ceasing to exist at all in 10-15 years (or sooner).

So, the issues over the weekend came in Houston, where the #3 Sooners were beaten by the Cougars. There was Iowa State losing to Northern Iowa and then TCU, supposedly a top-notch defense, allowed 41 points to South Dakota State.

Had Texas gone out on Sunday night and suffered anything close to last season’s 38-3 drubbing in South Bend, the Big 12 would definitely be considered a tweener conference, i.e. a conference better than the Group of 5, but maybe not quite worthy of the Power 4/5.

But, the Longhorns saved the weekend for the Big 12, in what was the most exciting and entertaining game of Week 1.

But, the reality is this: when Texas is playing well and being talked about, it lifts up the conference as a whole. TCU, Texas Tech, and Baylor can all win 10, 11 or 12 games, but the excitement and attention they create can’t match what the Longhorns can when they’re relevant. Just look at what ESPN released on Monday in regards to the ratings the game received.

Before you go and pull your hair out as a Texas hater, yes, much of this is generated by media, who pull a lot of the strings in Texas, and by ESPN, who now holds a financial stake in the Longhorns’ success because of their ownership of the Longhorn Network. But, still, put that aside if you can. When Texas does well, the Big 12 does well. There is more cache and respect nationally for the conference when UT is at the top of its game. Therefore, a small percentage of every Big 12 fan should have been somewhat happy with the outcome on Sunday night.

Trust me, I’m no Longhorn apologist. But, I realize what is best for the greater good in the Big 12.

Shane Buechele became the first true freshman QB to start for Texas since 1944 He made himself a household name overnight. Offensive coordinator
Sterlin Gilbert made the UT offense more exciting to watch in one night than it had been for the past five years. Buechele hitting John Burt on a fly route for a 72-yard touchdown was thrilling, and frankly, the two should’ve had another in the first half, but Burt dropped it.


The defense is young, but you can see there is an immense amount of talent there. I believe Charlie Strong is a damn good man who deserved to show the excitement he did following last night’s win. Same for QB Tyrone Swoopes, who has struggled for most of his career in Austin.

Now, the hype train is likely to run off the tracks from here. Some will predict UT to be a serious player for a Big 12 title. While, I don’t want to go there just yet, I understand why that thought will build up steam. Oklahoma and TCU looked shaky, and it’s tough to tell what Oklahoma State is, since they rolled over Southeastern Louisiana.

But, maybe Texas really is “back”. I thought it would take until 2017. They might’ve arrived a year early. Which, based on where the Big 12 currently stands as a conference, is far from the worst thing in the world, even if you do hate the Longhorns with a passion.

Is Oklahoma’s National Title hopes over?
HCS Week 1 Big 12 Awards: Who should you buy a beer for?
To Top