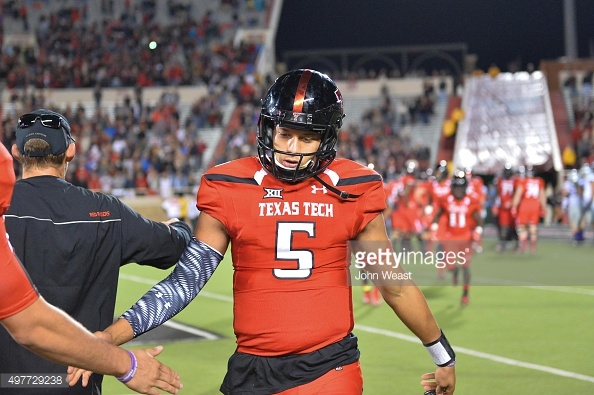 This is a new feature we decided to start this season as a fun way to keep the discussion flowing from the previous week of games and lead into the upcoming week of games. Plus, instead of just offensive/defensive player(s) of the week, we tried to mix it up to incorporate more opinions and thought-provoking discussion.

Most likely to have a postgame beer bought for him: Texas Tech QB Pat Mahomes: My hunch is that this won’t be the first time he wins our “free beer” award this season. Mahomes threw for 483 yards and 4 touchdowns in an easy win over Stephen F. Austin. And while the TTU defense should be improved, the Red Raiders might need a few more games of nearly 500 yards from Mahomes to win some games. As a big fan of an ice cold Natural Light, I’d offer Mahomes a cold one if I bumped into him tonight in Lubbock.

Most likely to have warm beer dumped on him: I would be showering the entire TCU defense in warm Miller Lite (a.k.a. piss water … yes, you could say there is irony in calling Natural Light delicious and Miller Lite piss water) after that horrendous performance against South Dakota State on Saturday night. 461 of total offense, 333 through the air, 128 on the ground, 41 points, and trailing until midway through the third quarter. Wow, what an embarrassment. Considering Gary Patterson built his name on defense, he has to be beside himself after witnessed that pitiful performance. Sure, he figured he would give up some defense for offense when switching to the Sonny Cumbie/Doug Meachem spread attack. But, Saturday night was not that.

Most likely to have postgame beer bought for him, but buyer might regret it: TCU QB Kenny Hill: Hill was impressive in the box score, going 33/49 for 439 yards and two TDs. OK, very impressive. But, it was against South Dakota State! Remember, Hill’s career got off to a magical start at Texas A&M, when he put up huge numbers against South Carolina and Lamar. That’s where the nickname ‘Kenny Trill’ was born. But, then when the grueling SEC West schedule kicked in, Hill struggled mightily, lost his starting job, and ultimately transferred. I hope Hill succeeds and I believe he will in this system. But, I need to see him against stiffer competition first. So, before you see Kenny Hill in the bar and go buy him that beer … let’s at least see how he does against Arkansas this week.

Newcomer of the week: Texas QB Shane Buechele: This was a no brainer, right? Buechele became just the second true freshman to start the season opener at quarterback for Texas, joining Bobby Layne in 1944. And in his debut, he set the world on fire, completing 16 of 26 passes with 313 yards of total offense, including two passing TD’s and one rushing TD. Buechele is one of the biggest reasons UT fans are on Cloud 9 this week and suddenly believe this team, after years of disappointment, is finally turning the corner.

Goat of the week: Oklahoma special teams coordinator Jay Boulware: He took responsibility for the horrendous kick six on Saturday. On Monday, Boulware told the media, “To be quite honest with you, I don’t think many of our kids really thought that they were in that situation even though I said, ‘Hey look, let’s cover.’ Because he’s kicked a 50-something yarder plus, 10-15 yards past that point many times. He made a mistake on his approach and then it happened. That’s what I mean. I’ve got to be more demanding on what I want from those guys.”

He’s right. Special Teams… you have ONE job. And in fairness, that job only gets criticized during the massive screw ups, and rarely gets congratulated. Special teams, it’s a thankless job. I almost felt bad for Boulware, then I looked it up and realized he was making over $300,000 to be … special teams coordinator.

Team of the Week: Texas Longhorns: On Monday, I wrote in detail about how and why the Longhorns saved the opening weekend for the Big 12, especially given the crucial time in the conference’s history. I’ve gotten a lot of crap for writing that, but I believe it’s mostly Longhorn haters who are still pissed off for a plethora of reasons. By the way, I get ’em and I feel ’em … I’m no Longhorn apologist, but I also want to see the conference survive and, eventually, thrive, and much of that can be helped by UT success on the field.