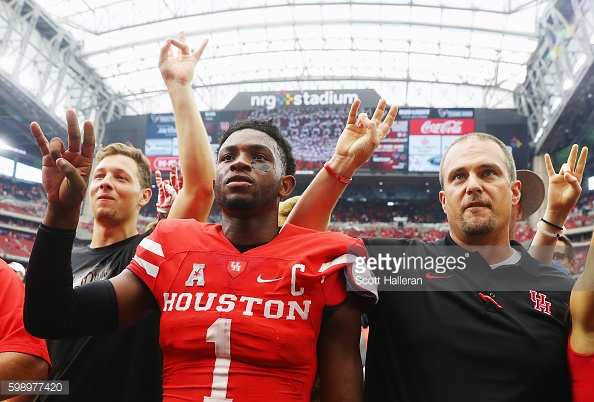 Houston (defeated Oklahoma 33-23): There cannot be a bigger statement than to defeat the defending Big 12 Conference Champion by double digits. Texas Governor Greg Abbott and University of Houston booster Tillman Fertitta will hold the victory over Bob Bowlsby’s head until he announces Houston will be joining the conference. What’s even tastier for Houston than a win over the defending Big 12 champs? Oklahoma is all out against the Cougars joining the Big 12. Now Sooners fans will be trolled on Twitter about their “fear” of facing Houston in future seasons. This is the definition of a historic victory. A loss could’ve kept Houston out of the Big 12, especially if the Cougars did not compete.

BYU (defeated Arizona 18-16): Under normal circumstances, BYU’s 18-16 road victory over Arizona would’ve easily made them the biggest victors this week. However, Houston just so happened to knock off the defending Big 12 Champion. Road victories against Power Five schools are extremely hard to achieve. The Cougars are practically playing a Power Five conference schedule and will continue its Pac 12 slate this week at Utah before a matchup against pre-season ranked UCLA. Others on slate to face BYU include Mississippi State, West Virginia and a visit to Michigan State. BYU can solidify its argument for inclusion by picking up road victories against Boise State and Cincinnati, who are also vying a spot in the Big 12.

SMU (defeated North Texas 34-21): At this point, SMU just needs results. They are known for their NCAA violations, and their basketball team is currently going through that. SMU has history and the potential to pack Gerald J. Ford Stadium. Another plus is the academic level SMU competes at. The Mustangs are a nice looking draw for the Big 12. If they just pull off wins and keep the trouble to a minimum, they could be the sleeper team who sneaks into the Big 12 Conference.

Air Force (defeated Abilene Christian 37-21): Could Big 12 expansion be Air Force’s to lose? Air Force has already turned down the Big 12 once, but now they have apparently made the first cut. According to this ESPN article from 2011, Air Force was once asked to join the Big 12.

The Falcons defeated FCS foe Abilene Christian after taking a 28-7 lead into halftime. One thing that could hurt Air Force is the lack of a competitive schedule.

South Florida (defeated Towson 56-20): The Bulls scored 49 points in their first three quarters and held a 49-17 lead at the end of the 3rd quarter. South Florida is in the Tampa market and can help the Big 12 Conference enter ACC/SEC territory. It’s a stretch, but ESPN’s Brett McMurphy reported the Bulls made the first cut.

UCF (defeated South Carolina State 38-0): There is always a victory in shutting out your opponent. The opponent is an FCS HBCU school, so take the victory as you will. Regardless, UCF did better than Cincinnati and UConn this week against FCS schools. ESPN.com’s Brett McMurphy also reported that the Orlando school, which is located deep in the heart of ACC/SEC territory, made the first cut. UCF also holds a BCS bowl victory after a 52-42 win over Baylor in the 2013 Fiesta Bowl.

Memphis (defeated Southeast Missouri State 35-17): The Tigers have reportedly been cut due to low academic standards. However, one report said Memphis is still alive for inclusion. Nothing has been confirmed and Memphis has released a statement to keep its commitment for confidentiality during the process. Memphis has seen major success on the basketball court and has shown to be competitive on the gridiron. They would add markets in four SEC states including Arkansas, Louisiana, Mississippi and Tennessee. The Tigers cruised to a 22-0 lead in the first quarter before taking its foot off the gas pedal. Again, they performed better against an FCS team than Cincinnati and UConn. It never hurts to outperform others.

Cincinnati (defeated UT Martin 28-7): The final score doesn’t show the entire story. FCS school UT Martin, who has not won a conference title since 2006, held a 7-6 lead over the Bearcats well into the third quarter. The Cincinnati athletic training staff must’ve provided their players with some coffee, because the Bearcats woke up in time to score three unanswered touchdowns. It was an awful look for a school trying to impress the suits at top. They’re lucky the Big 12 Conference didn’t tweet “Thanks for playing, but we’ve decided to look elsewhere” by halftime.

Connecticut (defeated Maine 24-21): What’s worse than trailing an FCS school in the second half? How about needing a game-winning field goal against an FCS school with 15 seconds remaining. Luckily for UConn, they have a BCS appearance and multiple NCAA Championships in both, men’s and women’s, basketball. Additionally, being in between the New York City and Boston markets provides some serious help. All-in-all, UConn does not need beautiful performances in football. Winning ugly will suffice, which is something Cincinnati must avoid at all costs.

Colorado State (lost to Colorado 44-7): This rivalry was one of the most appealing things about the Rams. They were 3-4 in the past seven years in the Rocky Mountain Showdown with much less talent. This loss sends a major blow to the Rams. The Big 12 would love to smack the Pac 12 in the face for taking Colorado. It’s almost as bad as struggling against an FCS opponent. Keyword: almost. According to The Coloradoan, the Rams have made the first expansion cut.

Temple (lost to Army 28-13): The only thing worse than losing to Army is losing to an FCS school. Previously, Temple has been kicked out of a BCS conference in the Big East Conference. After finding success in the MAC, Temple was invited back to a struggling Big East that had already lost its top powers in Boston College, Miami (FL) and Virginia Tech. Although not confirmed, there are reports Temple did not make the first cut in the expansion process. However, if they had not already been cut, this loss will almost assure them of being out.

Rice (lost to Western Kentucky 42-14): If Rice makes it into the Big 12 Conference, it’s likely not because of their football team. The program hardly has any success historically. Its claim to fame is a stadium which hosted Super Bowl VIII. Rice is a baseball school with strong academics. It made ESPN’s reported first cut. If so, then that may be simply due to its academic profile. Some claim Rice to be the “Harvard of the South”. Regardless, a humiliating loss to a Conference USA team is not how you gain entry into a Power Five conference. The Owls will have to figure out a way to do better.

Arkansas State (lost to Toledo 31-10): The Red Wolves might have thrown their name into the hat for expansion simply for publicity. However, it would be a smack in the face to the Arkansas Razorbacks if they were invited. Regardless, this school has virtually no resume and a lopsided loss to a MAC team is grounds for removal. Arkansas State did not make ESPN’s reported first cut. However, nothing is confirmed.

Northern Illinois (lost to Wyoming 40-34 in 3 OT): This is another one of those reported schools who have been cut, but nothing is confirmed. The Huskies have a BCS appearance under their belt, but outside of it, they’ve been a struggling program. It was a bit of a surprise that Wyoming didn’t throw its hat into expansion talks like longshots ECU, San Diego State and Temple did. You’d have to figure, based on travel time, the Cowboys had a better shot than all three of those teams though. Regardless, NIU lost to a Mountain West team that’s not named Air Force, Boise State or Colorado State. It wouldn’t be the end of the world, but this certainly hurts the Huskies.

Tulane (lost to Wake Forest 7-3): The Green Wave could’ve easily been on the winner’s side. Wake Forest is a struggling Power Five team. This was a road game, and a victory was necessary to help Tulane’s case for expansion inclusion. Tulane went up 3-0 in the first quarter, but could not score afterwards. This program is relying almost solely on its New Orleans SEC territory market, and with Memphis vying for an opportunity, that isn’t a strong argument. Tulane is here solely for a major opportunity being squandered.

What the Big 12 Missed Out On:

Boise State (defeated Louisiana-Lafayette 45-10): This may have something to do with the University of Oklahoma. Remember the 2007 Fiesta Bowl when Boise State upset the Sooners? The Broncos have complained for well over a decade that Power Five schools refuse to schedule them, and Oklahoma is a prime example why. The flare for the Broncos has been lost since the Chip Peterson days, but they can still smoke any Group of Five school. Boise State will try to crack the playoffs and score revenge on the Big 12 that way in future years.

East Carolina (defeated Western Carolina 52-7): The Pirates came out and announced they will not be added to the Big 12 Conference this round of expansion. They were a long shot to begin with having little success in football and basketball. However, they certainly look like a stronger candidate now than Cincinnati and UConn. At least the Pirates can hold their own against an FCS team.

New Mexico (defeated South Dakota 48-21): The university confirmed that Bob Bowlsby notified the school it would not be added to the Big 12 Conference. Albuquerque is a location close in proximity, but would not have added much in regards to market size. Additionally, New Mexico has seen minimal success with its major athletic programs. At least they can seem like a better candidate than Cincinnati or UConn for the time being. The Lobos took a 35-14 lead into halftime and clearly disposed of the FCS foe without a problem.

San Diego State (defeated New Hampshire 31-0): The Aztecs shutout an FCS opponent that had to travel virtually from coast-to-coast. The San Diego Union Tribune reported that several sources confirmed the Aztecs are out of the running, and that the No.1 reason was simply location. Perhaps, if West Virginia wasn’t added, it would be the Aztecs rather than Cincinnati and UConn who were getting looks. Regardless, San Diego State is doing better against FCS teams than some of the current leaders in expansion talks.

UNLV (defeated Jackson State 63-13): You know what is going to be in this paragraph: UNLV looked better against an FCS opponent than Cincinnati and UConn. The Rebels confirmed they were notified of missing the first cut. Being in Las Vegas is a nice temptation, but it may have also hurt with the image Bob Bowlsby is looking for. Obviously, there are certain concerns there with the NFL and NBA. Historically, UNLV has major success in basketball with the 1990 NCAA Tournament Championship. They also have three more Final Four appearances. Football is the top key for Big 12 inclusion though, and that is a sport UNLV lacks success in.

Texas’ win, massive rating save Big 12 on opening weekend
How have Iowa State head coaches fared in first game against Iowa?
To Top