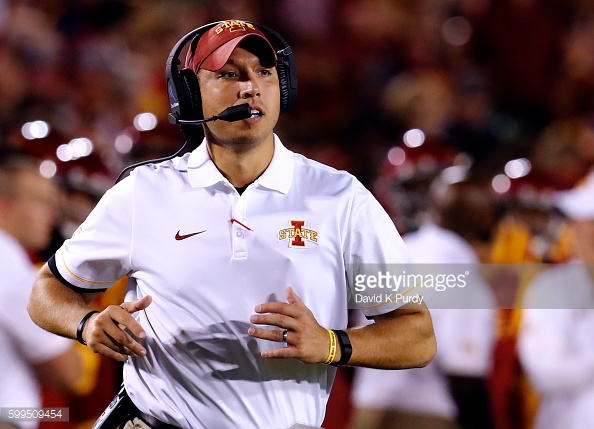 With Matt Campbell getting ready for his first ever edition of the Cy-Hawk series, I was curious to see how the previous Iowa State head coaches fared against Iowa. Now, we know the all-time series heavily favors the Hawkeyes. The exact record is 41-22 in favor of Iowa. But, what about their first seasons on the job? How did every coach do in his first game against Iowa in the past 39 years? Let’s take a look.

So, long story short, NO, Matt Campbell does not ‘have’ to win Saturday’s game against Iowa. In fact, the only coach to win his first game against Iowa in the past 35+ seasons was Gene Chizik, who was gone after two seasons. So, for Iowa State fans who want to use history as any kind of barometer, maybe a loss isn’t such a bad thing for Campell, IF you want him to have a long tenure in Ames.

The two teams took a break before splitting a pair of games in 1933 and 1934. From there, it was a 33 year hiatus, which has, thankfully, since been renewed and has been played every season since. Since the renewal, Iowa State is 16-25 against their in-state rivals.

Sure, we all want to see Matt Campbell pull off the win on Saturday (especially after last week’s brutal loss to Northern Iowa). But, if there is any solace in a pending loss … it’s that it just might mean Campbell hangs around Ames longer than some expect 🙂