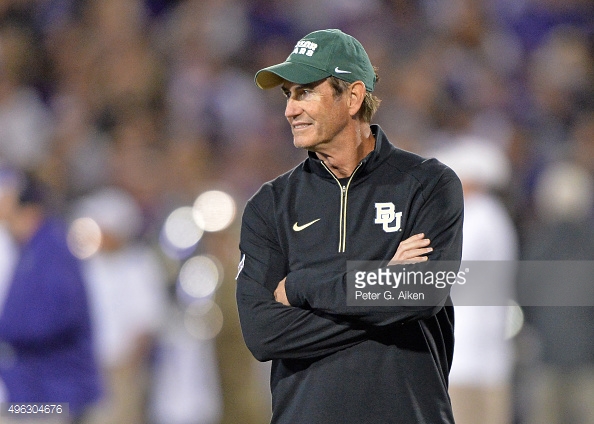 According to KWTX television in Waco, there are several university insiders, along with secret records obtained by the station, that Pepper Hamilton came to Baylor with an agenda to dismantle the program, while using a racial undertone.

KWTX spoke to several people who were interviewed by Pepper Hamilton, most of them employed by Baylor, and who all requested anonymity.

Two of those people interviewed by Pepper Hamilton, by two different investigators,  were reportedly asked why there were so many black players on the team, and one was asked if he ever saw his black athletes hanging around white women.

Pepper Hamilton denied those claims, telling KWTX, “The investigation focused on the school’s response to reports of sexual assault and dating violence. The investigation did not explore issues related to the diversity of the team, nor were any coaches asked about diversity-related issues.”

As for Art Briles, he was reportedly told on May 13th that his job was safe. But, about two weeks later, he was fired.

It was clear Briles was blindsided by the firing, as his then-lawyer Ernest Cannon told KWTX, after seeing all the evidence what was what the worst thing Art Briles did during his seven years leading the Bears, Cannon replied, “Not obtaining a lawyer before speaking to the board.” The report calls Briles too trust of the folks running the university.

Now, the report rightly addresses the fact that, despite what the national media led you to believe earlier this spring, just two football players have been convicted of sexual assault during Briles’ tenure at Baylor. And the KEY addition to that: Neither player played a down of football for the Bears after the coaching staff learned of the accusations.

Tevin Elliot was convicted of two counts of sexual assault, for assaulting a former Baylor student in 2012. Shortly after learning about the first allegation, Elliot was kicked off the team.

Sam Ukwuachu was convicted in 2015 of assaulting a former Baylor soccer player in 2013. The uproar against Ukwuachu also went back to his time at Boise State when Texas Monthly reported that he “had been kicked off the Boise State team for a previous incident of violence involving a female student.” BUT, that has proven to be false and that Ukwuachu was in good standing with Boise State at the time of his transfer.

It’s a long read, but a hell of a read and good investigative reporting and journalism by KWTX in Waco. Some will call it ‘hometown cooking’, but I don’t … and it deserves 10 minutes of your time. Once again, to read the story all the way through, check it out here.