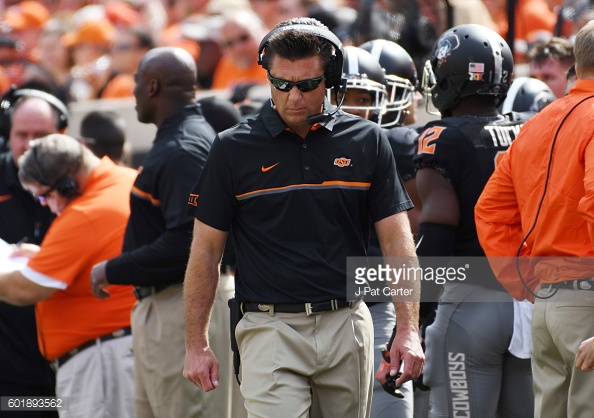 Anytime there is a heartbreaking, stunning, shocking, ridiculous loss like Oklahoma State suffered against Central Michigan (at least a for now) on Saturday afternoon, twitter and facebook are bound to go absolutely berserk. So, here are some of the more interesting, informative, and hilarious social media reactions following the Cowboys defeat.

Before we start, even CMU thought this game was over!

Next up… here is a pretty sweet angle of the final play.

This was the final play. Holy cow!! #okstate pic.twitter.com/Jx52kDspJ3

I’m guessing the guy with this sign promptly ripped it up.

You work on that play every Thursday late in practice just for that situation. Executed correctly, refs got it wrong.

Rule 3-2-3. “The period is not extended if the foul is by the team and possession and the penalty includes loss of down.” Oops.

So the refs admit they screwed this one up…

Referee Tim O’Dey says “that extension should not have happened,” regarding the final play of the #okstate-CMU game. pic.twitter.com/1rwcJFGrQ5

A sad, but accurate description by Pistols Firing Blog. This is about a 1 in a million chance of all these things happening.

The string of things that had to happen in the last 4 SECONDS for #okstate to lose. pic.twitter.com/ZVSGS3kTVg

Some well-detailed thoughts from a friend of mine who is a HS basketball coach in Oklahoma (and clearly an OSU fan).

Some thoughts on the tweets I’ve seen and tweeted regarding the #okstate football game a bit jumbled but thoughts pic.twitter.com/NasVALkSsC