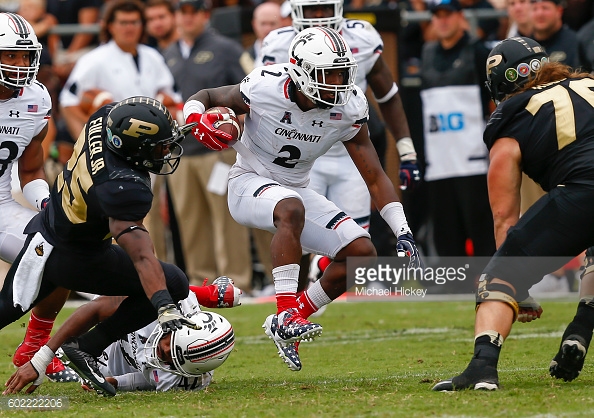 Cincinnati 2-0 (defeated Purdue 38-20): This is a major victory for the Bearcats. They are one of the favorites in expansion, but many critics are saying they’re only being considered because of their proximity to West Virginia. Purdue has not been a good program since the days of Joe Tiller, specifically when they had Drew Brees. Regardless, they now hold a win over a Power Five conference team this season. Now the entire nation will be watching when they host Houston in a battle for expansion favoritism. It makes you wonder if Bob Bowlsby will invite all 10 Big 12 presidents to his house for a watch party.

Houston 2-0 (defeated Lamar 42-0): Winning this week does not make the Cougars a “winner”. The fact Oklahoma blew by Louisiana-Monroe 59-17 makes Houston a winner this week. As long as Oklahoma continues to pick up wins, Houston will be considered a winner. The shop in Houston which starts selling Sooners gear will be genius this week. Oklahoma faces Ohio State, and every Cougars fan will be anti-Ohio all week long. Look above for an extra reason why.

Air Force 2-0 (defeated Georgia State 48-14): This will be brought up each and every week. Air Force was invited to the Big 12 Conference in 2011. The Falcons declined the opportunity to join at that time. Air Force is now 2-0, but does not play a Power Five conference team this season. The academy has tremendous academics and brings in a national, and perhaps global, market. Those are two things the Big 12 Conference wants.

Colorado State 1-1 (defeated UTSA 23-14): The Rams defeated a team in Texas, which in the Big 12 Conference is always a plus. However, UTSA started playing football in 2009 and this was a home victory for the Rams. Colorado State will play a creampuff in Northern Colorado next week. It’s the following week that the Rams really need a statement. They will travel to Minnesota Sept. 24 and it’s a must win after the Rams were destroyed by rival Colorado in week one.

Temple 1-1 (defeated Stony Brook 38-0): Temple bounced back after a loss to Army in week one. It’s rumored the Owls did not make the first cut, but nothing has been confirmed. Even so, Temple doesn’t have much of an athletic resume that makes them appealing to a Power Five conference.

Tulane 1-1 (defeated Southern 66-21): Tulane should probably be 2-0, but a lack of offense cost them a major victory in week one. So far, Tulane has been par for the course. They can one-up fellow American Athletic Conference member Connecticut by defeating Navy next week.

Memphis 1-0 (IDLE): There are reports that Memphis was cut due to low academic standards. There are also reports that Memphis is still in the running. The Tigers have some amazing selling points with Final Four appearances in basketball and a major booster in FedEx. They will get a shot to show off their football team to the Big 12 Conference next week when they travel to Kansas.

Northern Illinois 0-2 (lost at South Florida 48-17): When you are trying to make a selling point, it’s a good idea not to let the competition make you look bad. South Florida humiliated the Huskies. This comes in addition to a report from ESPN that Northern Illinois did not make the first cut and South Florida did. Other than one BCS appearance, the Huskies do not have much of a resume. This blowout loss is an additional nail in an already closed coffin.

SMU 1-1 (lost at Baylor 40-13): The ponies competed for one half. Unfortunately for SMU fans, both halves count. Baylor mauled SMU 34-7 in the second half. This is a Baylor team which has plenty of talent, but lost nearly its entire recruiting class after the firing of Art Briles. Perhaps, had this game been scheduled in November, SMU might have a marquee victory. Instead, this scores says SMU will struggle if added to the league. Even worse news: there’s a team down I-45 who has a victory over the Big 12 Conference favorite. Some members are struggling to accept one Texas team, much less two.

UCF (1-1) (lost at Michigan 51-14): If UCF had gone into the “Big House” and competed, it would be one thing. This game only proved the Golden Knights are not ready to compete at the level of the Power Five Conferences. It was 21-0 by the end of the first quarter and 34-7 by halftime. It was an awful look for Central Florida. Next week is a must win for them as they host Maryland.

Connecticut 1-1 (lost at Navy 28-24): Poor clock management cost the Huskies a chance to remain undefeated. Even so, a Big 12 shouldn’t be in a situation where it could lose to Navy. Then again, the Mid-American Conference scored two victories over Big 12 teams this week. Connecticut will be pointing to its academics and basketball as its selling points. They also have a BCS appearance in the 2011 Fiesta Bowl.

BYU 1-1 (lost 20-19 at Utah): BYU could easily be in the winner’s column. It’s truly unfair to BYU to have people simply look at the score. The Cougars lost trying to go for a two-point conversion in the final minute. However, during the third quarter, there were two absolutely outrageous targeting calls against BYU. Video evidence clearly shows both hits were clean. The helmets, much less the crowns of them, never came in contact on either hit. The broadcast crew called out the officials, citing the penalties as “egregious”. BYU head coach Kalani Sitake got directly into the face of the officials and had to be restrained even after receiving an unsportsmanlike conduct penalty himself. Losing two starting defenders seriously hurt BYU during this loss. We will never know if that would have truly made a difference, but it certainly did not help BYU in a game which came down to the final minute. Now the Cougars will be without those same two defenders for the first half against UCLA. Interestingly enough, the officiating crew was from the Big 12 Conference. Brad Van Vark, who hails from Iowa, is the crew’s referee.

Rice 0-2 (0-1 in CUSA) (lost to Army 31-14): Army is now 2-0, and has defeated two Big 12 expansion candidates. Rice has been humiliated twice now with no sign of improvement in sight. The Owls are simply deplorable this season. However, the Big 12 Conference reportedly eliminated Memphis due to a lack of academics. Rice has, by far, the best academia of any candidate in the expansion race and the school will hang its hat on that notion.

Arkansas State 0-2 (lost at Auburn 51-14): Although not confirmed, it’s been reported the Red Wolves did not make the first cut. It’s not a surprise either as they rarely compete with Power Five Conference schools. At least they aren’t being kicked out of Sun Belt Conference like a program you’ll read about below.

What the Big 12 Missed Out On:

Boise State 2-0 (defeated Washington State 31-28): Boise State wants to crack the playoffs. To do so, they will need to go undefeated. There is not an FCS team on their schedule, and they have two Pac 12 opponents. They’ve now defeated one of those. Washington State slipped up against Eastern Washington in week one, so this isn’t exactly a marquee win. The Broncos will have their opportunity for a road victory against a Power Five conference team Sept. 24 when they travel to Corvallis to play Oregon State.

San Diego State 2-0 (defeated Cal 45-40): The Mountain West played extremely well against the Pac 12 this week. Another one came late at night when San Diego State produced a home win against Sonny Dykes and his Cal Golden Bears. The Aztecs do not play against Boise State in the regular season. Could we see two undefeated Big 12 snubs in the Mountain West Conference Championship? We’ve only gone through two weeks, but each of these teams have picked up victories over a Pac 12 team now.

East Carolina 2-0 (defeated North Carolina State 33-30): East Carolina picked up a victory over a Power Five conference team and remains undefeated at the moment. If they can win on the road against South Carolina Sept. 17, East Carolina fans will have the right to say, “Hey Big 12, are you sure you want to leave us out?”. East Carolina confirmed they received the news they are out of the running as an expansion candidate.

New Mexico 1-1 (lost at New Mexico State 32-31): New Mexico State is being kicked out of the Sun Belt Conference. It could very well join Idaho in dropping to the FCS shortly. As if losing to your in-state rival doesn’t dent one’s pride enough, this is downright derogatory. The Big 12 Conference has no interest in entering the Land of Enchantment.

UNLV 1-1 (lost at UCLA 42-21): UNLV couldn’t produce the same results against a Pac 12 foe as Boise State and San Diego State managed to. It was a long shot for UNLV to enter the Big 12 Conference, but their basketball history gave them more of a shot than some of the programs who have not confirmed their ouster yet. The Rebels will play at Central Michigan next week. Perhaps they will have better luck against the Chippewas than Oklahoma State did.