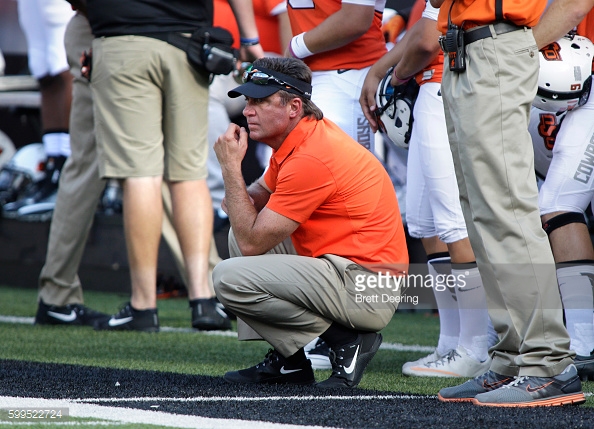 It’s week 2 of our new feature we decided to start this season as a fun way to keep the discussion flowing from the previous week of games and lead into the upcoming week of games. Plus, instead of just offensive/defensive player(s) of the week, we tried to mix it up to incorporate more opinions and thought-provoking discussion.

Most likely to have a post-game beer bought for him: Geez, I mean, let’s be honest. After how last weekend went for the Big 12, there aren’t very many options. So, I’m going to go with Charlie Strong. His Longhorns showed no hangover at all following their win over Notre Dame. Yes, it was UTEP, but still, they go out there and win by 34 points, cover the spread, and keep all the momentum going into Week 3. When you see Clemson struggle with Troy and Georgia with Nicholls, let’s just give the Horns some credit. Plus, coach Strong likely hasn’t been bought too many beers during his time in Austin … so let’s start making that up to him.

Most likely to have a warm beer dumped on him: There might not be enough warm, leftover beer at the Beta house in Norman to sufficiently dump as much of it as we need to on all the candidates in the Big 12. If I felt inspired, I could do a separate column on, at least, half a dozen people that deserve a keg of room-temperature Miller Lite on their heads.

So, my ultimate winner is going to be TCU QB Kenny Hill. I wrote about this on Monday saying he was the guy who you should “buy a beer for, but might regret it at a later date”. That’s certainly what happened in Week 2. Hill overthrew and underthrew guys all night long, threw a big pick six, and then, after scoring a huge touchdown late, did the slash (although he claims otherwise), got his team hit with a penalty that allowed Arkansas to come down the field and tie the game. It was a boneheaded decision by a guy who is supposed to be the leader on the team. He should be doused with the High Life.

Most likely to have post-game beer bought for him, but buyer might regret it: WVU QB Skyler Howard. He tied a career high with five touchdown passes on Saturday against Youngstown State. If you told me before the season that one of the last 3 undefeated teams in the Big 12 would be the Mountaineers, I’d have been surprised. Not because I didn’t think they could be a good team, but mostly because I expected others to stay undefeated longer (looking at you OU, OSU, TCU). When Skyler Howard is playing well, he looks like the real deal. But when he’s struggling, he looks like a mediocre FCS quarterback. It’s similar to an Amstel Lite, good when you’re desperate for a brew … but when push comes to shove, just get me a Natural.

Most likely to have a post-game beer bought for him (out of sympathy): OSU head coach Mike Gundy. This one’s a no brainer, right? In fact, I’m not convinced Gundy wasn’t already celebrating with his post-game beers before the final play call. So many things went wrong here. First off, why not just have Rudolph run backwards. Hell, even if he reaches the end zone, which he wouldn’t, it results in a safety and the Cowboys win! And then if I’m Gundy, and I’m confident the referees decision was the wrong one, I am going out and lying down on the 50-yard line and saying “this play won’t be allowed”. Poor guy. Someone get this man a cold one next time you see him at Eskimo Joe’s, if nothing else, out of pity. I can’t imagine how many sleepless nights he’s had this week.

Put him under the ice luge: Texas Tech QB Patrick Mahomes. My goodness, the guy has got to be beside himself wondering why scoring 50+ points never seems to guarantee the Red Raiders a victory. Tech has lost 3 of their last 12 games when scoring at least 52 points. That is just an amazingly embarrassing statistic. When do Kliff Kingsbury and DC David Gibbs starting figuring this thing out on defense?! This guy deserves to let loose because if he doesn’t end up in NYC in December for the Heisman ceremony, it won’t be anyone’s fault but his own defense.