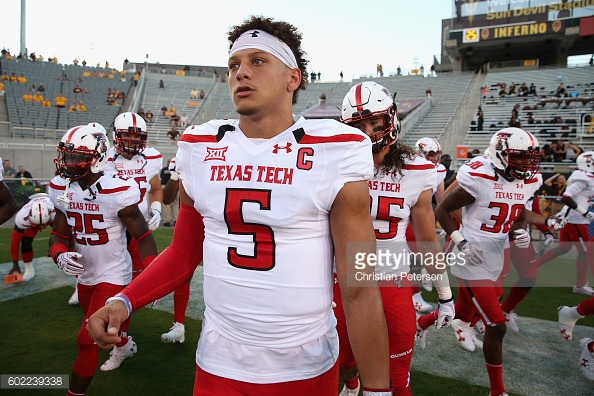 The Red Raiders dropped a tough one on Saturday night, in what was nothing short of entertaining and a thrilling game against Arizona State. The Red Raiders were out gunned in the desert and couldn’t keep up with the record-tying barrage of touchdowns from running back Kalen Ballage. He scored a total of eight TD’s on a forgettable hot steamy night for the Tech defense. It was by far the highest scoring game of the weekend with the Sun Devils putting up 68 total points to the Red Raiders 55. After the loss, there was a lot of doom and gloom in the air for the fans and supporters of Texas Tech. Expectations for the season seemed to be lower, and after two games, optimism began to wane while frustrations grew.

Those frustrations seemed to stem from the defense (or lack thereof) from the Red Raiders. Anyone who sees the final box score knows it’s never a good sign to relinquish 68 points in one game. It usually spells out a loss, if not a total thrashing from the opponent scoring those copious amount of points. Rightfully so, fans should be disheartened from seeing a performance like that. However, on the other side of the coin the offense put up 55 points in an opposing environment that’s not the easiest to play in. Yes, cynics will point out that Tech has lost three of its last 12 games when they’ve scored 52 points or higher. That’s not good folks, but I’ll take a team with that scoring capability any day. Quarterback Patrick Mahomes is easily one of the best players in the nation. As a junior, and I know it’s in a high-octane offense, he leads the nation in passing yards with 1023 and is tied for the lead in touchdown passes with nine. His command of the offense and accuracy, (70.85%, ranking top 20 in the nation), has him among the elite quarterback weapons in the country. Mahomes is also leading the team in rushing which isn’t always the best sign for a successful team. He’s currently tops in carries (21), yards (101), and touchdowns with three. He’s doing whatever’s asked of him and placing the burden of moving the ball down the field firmly on his shoulders. Depending on the Red Raiders’ success, Mahomes could be a dark horse candidate to be in New York for the Heisman ceremony in December. The good news is, as long as Tech has Mahomes and this potent offensive attack, they should be in every game until the end.

The bad news is the offense can only score so many points. The Tech defense lived up to its reputation and played poorly after the Sun Devils initial opening series. Texas Tech actually only allowed 9 points after the first quarter and on three of the first four drives the defense forced punts. Unfortunately, for defensive coordinator David Gibbs that wasn’t going to be the case for the rest of the night. Excluding the drive before halftime ASU would score on its next eight drives. It was really an overall disconcerting performance for a team that stifled the Sun Devils early. There was hope that the defense could “do their job” and not allow more than 40 points. Instead Arizona State used trickery and exotic formations like the ‘wildcat’ to do anything they wanted and pleased. I disagree with the people who are calling for another coaching and scheme change to this anemic defense. It’s going to take time for Gibbs to get the players in place to have the defense he envisions. Entering his second year at the helm, Gibbs is working with a relatively bare cabinet. Many players are holdovers from previous recruitments and regimes. The players he’s personally brought on are still raw and inexperienced. His defense is predicated on creating pressure and forcing turnovers. Right now that’s not happening, but with some scheming tweaks and well-timed play calling the floodgates could open up. Sure, Tech will never be able to match up with the true elite defenses across the nation because of talent disparities. But, with an aggressive style and ‘never quit’ mentality, they can develop a knack for making big plays. This would immensely help with getting off the field in order to make way for Tech’s vaunted offense. With time I believe this phase of the team will continue to improve and have more of the feel of a competitive, get-at-you type group.

It’s going to take some scheming and prepping, but the defense can be serviceable enough to make the Red Raiders a bettor’s underdog in the wide-open Big 12. With some help from the offense and a little more time of possession, the defense can be fresher and utilized to their fullest. With Louisiana Tech, Kansas, and Kansas State up next, they have a chance to right the ship and get back on track. For now, take a breath and relax Tech fans. It’s the second game of the season and patience may be bitter, but its fruit is sweet.