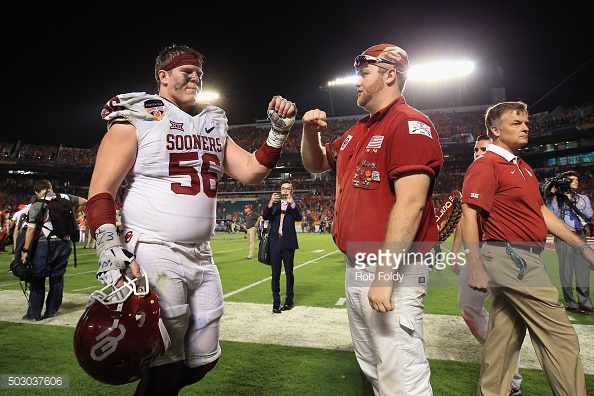 Ty Darlington was a two-year starter and a captain last season for the Oklahoma Sooners. But, his ability on the football field was only a part of what defined the center.

Last year, Darlington became the first recipient from OU to win the Campbell Trophy, which is awarded to the nation’s top football scholar-athlete. Also he received the Wuerffel trophy, which is presented to the FBS player who best exhibits exemplary community service.

Now, Darlington works in Student-Athlete Development at OU as an Administrative Fellow for the Student-Athlete Experience. He also dabbles in media and makes appearances on Sooner Sports TV and several radio stations.

In addition, Darlington runs his own personal blog, and he called out Sooners fans ahead of the enormous game on Saturday night against Ohio State, writing:

“My Call to Sooner Nation

I have a question for you, Sooner Nation.

How do you view your role?

We NEED you like never before. This Saturday promises to be one of the biggest games and one of the most electric atmospheres in our storied history, and we need YOU to do your part.”

That is strong stuff from Darlington, and I highly suggest reading the entire post. He points back to last season’s game at Tennessee and just how loud the stadium was in Knoxville, adding, “The noise was a constant, oppressive force. I could literally feel it on my skin.”

So Sooners fans… will you give the Buckeyes the same feeling Darlington had in Knoxville last season? Let’s hope so. Win, and the College Football Playoff hopes are reignited. Lose… and forget it.