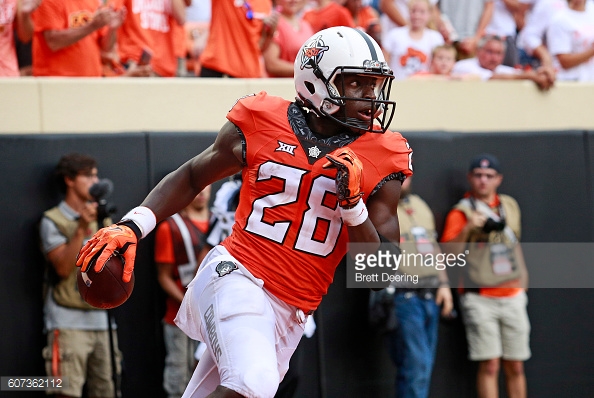 Washington had a monster afternoon against Pittsburgh on Saturday, catching  nine passes for 296 yards and two touchdowns to help lead the Cowboys to the 45-38 victory. His receiving yards are the most for any FBS player since Michigan’s Jeremy Gallon had 369 receiving yards against Indiana on Oct. 19, 2013.

On defense, TCU linebacker Ty Summers won the Player of the Week award after he led TCU with 16 tackles in the 41-20 win over Iowa State for the second-best game of his career. The 16 tackles tied for the 11th-most in a game in 16 seasons under head coach Gary Patterson.

There were co-winners in the Special Teams Player(s) of the Week with Kansas State punt returner Dominique Heath and Oklahoma State punter Zach Sinor sharing the honors. Heath recorded a 75-yard punt return for a touchdown in the 63-7 win against Florida Atlantic. Meantime, Sinor punted six times for an average of 47.7 yards.

Lastly, the Big 12 Newcomer of the Week was Baylor running back JaMycal Hasty, who had 14 carries for 105 yards and a touchdown, while also catching two passes for 26 yards in Baylor’s 38-10 win over Rice.