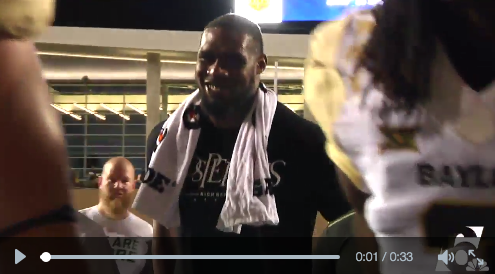 Yesterday, news began to circle that former Baylor DE Shawn Oakman, who was indicted on charges of second-degree felony sexual assault in July, was in the Baylor locker room following their win over Rice. During his weekly press conference, interim head coach Jim Grobe denied knowing who Oakman was.

Statement from Baylor University regarding Shawn Oakman’s presence in the locker room after the Rice game. pic.twitter.com/bc1Py6b88u

The key was to hear the University say he is not allowed in Baylor-owned facilities nor in the locker room at future away games. Still, how Oakman got past so many levels of security and personnel to get on the field and into the locker room is pretty amazing… and pretty ridiculous and embarrassing.

I do think there has been somewhat of a witch hunt against Baylor in some aspects of what’s gone on here regarding the investigation and the Pepper Hamilton report. But, the reality is Oakman was charged and indicted for sexual assault. There’s no gray area with him. He has no business being anywhere near campus or the Baylor football facilities.