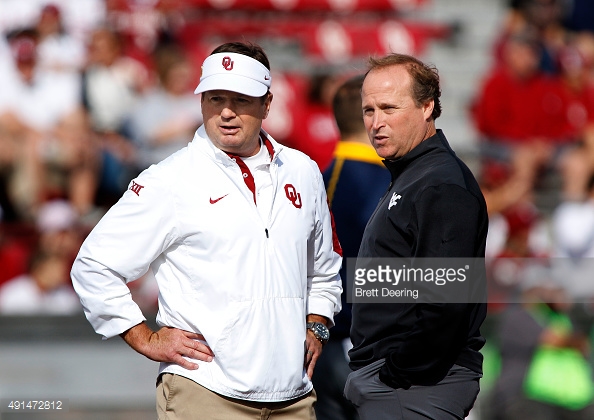 With three weeks of the college football season in the books, the Big 12 is 3-7 against Power 5 non-conference opponents (including Houston). The conference lost a couple games to MAC teams, and even lost to an FCS opponent.

This week the Big 12 has zero teams ranked in the Top 15 of the AP Poll, the first time this has happened since the league’s inception in 1996. Needless to say, it’s been a nightmare first three weeks for the Big 12. Before the season, we wrote how important is was for the Big 12, during a tumultuous time, to have a strong September start. So, on Monday’s media teleconference, several coaches were asked about the Big 12’s struggles early on and what it means.

In typical Bob Stoops fashion, the Oklahoma coach cut off the question before it was finished and said, “I’m not paying attention to everybody else around the league. I know for us, we’ve lost to two top-5, 6, whatever they are, teams in the country and they were both good football teams.”

Well, the problem is Stoops’ team was smoked in both games, losing 33-23 to Houston and 45-24 to Ohio State. Yes, they are both Top 5 teams, but when OU went up against them, the Sooners didn’t even looked liked they belonged on the field. This is similar to what happened in last season’s College Football Playoff semifinal against Clemson, when Oklahoma lost 37-17.

Texas head coach Charlie Strong, whose team picked up a great win over Notre Dame in Week 1, but then lost to a very average Cal team on Saturday night, tried to put a positive spin on the conference’s start, adding, “You look at our league, we’ll be fine, we still have conference games that will count. There are some really good teams in this conference and I think we’ll be okay.”

Well, Strong is technically right. The conference games count, but the question about the conference’s struggles against other Power 5 conferences is really what matters here. If the Big 12 is viewed as a step below the likes of the SEC, Big Ten, ACC, and Pac-12, then their odds of having a 1-loss team beat out a 1-loss team from another conference are slim to none. The Big 12 had a chance to gain respect and credibility over the past three weeks, yet they gained neither. In fact, they likely lost some of each.

Strong is right in saying there are some really good teams in the conference. But, the question remains: which team is elite? Or, does an elite Big 12 team event exist? From what we’ve seen so far, the answer is no.

West Virginia head coach Dana Holgorsen went a little more in depth on the topic, saying, “I think it’s too early to tell at this point, honestly. The one thing about it honestly is, we’ve been instructed to up our non-conference schedules and that’s what everybody’s doing. We got another tough non-conference game this week against BYU who’s a national team. A lot of the Big 12 teams, pretty much everybody but one, has done a great job scheduling high-profile, non-conference games…. What I see is a bunch of good teams in the Big 12, pretty competitive, looks pretty wide open to me.”

First off, Holgorsen took a very clear jab at Baylor and their scheduling of easy non-conference opponents. For the most part, that’s a well-deserved jab, although Baylor does have a home and home scheduled with Duke the next two seasons, Ole Miss in 2020, and BYU in 2021 and 2022.

The issue Holgorsen brings up is similar to Strong’s message of, “well we’re playing good teams, so we can’t win ’em all!” Unfortunately, the point is the Big 12 is not even winning close to half of its tougher non-conference games. These problems can be pointed back to the recent batch of conference realignment when the Big 12 lost quality programs like A&M, Nebraska and Missouri. Realignment has also allowed the SEC to recruit heavier in the state of Texas, which has resulted in some of the best players leaving the Lone Star State (and the Big 12) for other homes.

Sure, this could just be a down year for the Big 12. Or, it could have been just the perfect storm of several teams having an ‘off day’ against big-time competition. Unfortunately for the conference, there are no excuses. This was its chance to ‘put up or shut up’ when it came to Power 5 conference hierarchy, and they failed … miserably.