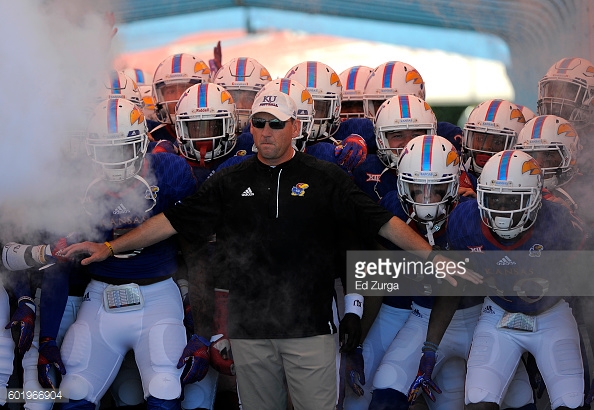 So, not much has gone right for Kansas football this season … or the past seven seasons for that matter. But, if you are looking for that silver lining (and let’s be honest, if you’re a KU football fan, you’re on the eternal search for the silver lining), then here is a positive to hang your hat on.

Considering one of those turnovers resulted in a pick six, this stat is even more impressive. But, still, let’s not overlook the fact that the Jayhawks lead the nation with their 11 turnovers.

As for those turnovers, there is not one person or unit to blame. Starting with the quarterbacks, Montell Mozart has thrown three interceptions, while Ryan Willis has thrown one. Then, KU has three fumbles on punt returns, two by quarterbacks, one by a receiver and one following a poor snap.

Head coach David Beaty took the positive spin, saying, “That’s amazing what our defense has been able to do. If we can just minimize mistakes, that’ll help us get into the win column.”

That would be a great start. KU has nearly two weeks to try and learn how to minimize those mistakes before playing Texas Tech in Lubbock next Thursday night for a 8:30 ET/7:30 CT kick off.