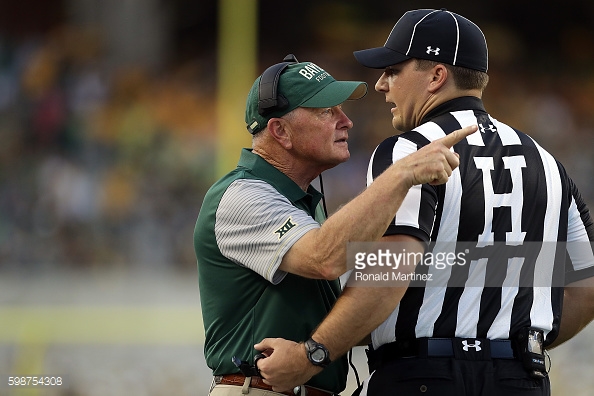 Baylor interim coach Jim Grobe took a lot of heat on Monday when he said he didn’t know who former Baylor All-American Shawn Oakman was, when it was reported that Oakman, who was indicted for sexual assault, was in the locker room last weekend.

Well, Grobe met with the media on Wednesday and wanted to clarify his comments:

“I’d like to clarify some things from our press conference from earlier this week. On Monday the question was asked if I knew that Shawn Oakman was in the locker room in the game. I responded that I do not know Shawn Oakman, and with that I mean that I’ve never met him. He did not play for me, I did no recruit him, and I wouldn’t recognize him.

“Had I recognized him, the situation would have been handled differently, but regardless of that, my comment of ‘I don’t know him’ was taken out of context and the way it was portrayed by some in the media, in my opinion, was unprofessional and unfair.

“Maybe it would have been appropriate to follow up with the question with, ‘Do you know that Shawn Oakman played for Baylor?’ Or, ‘Did you know that after his senior season he was charged with a criminal offense?’  To those questions I would have obviously answered yes. I’m very aware of the misconduct issues that impacted this program prior to my arrival and the players involved, but my focus and my priority from the day I arrived have been the actions of both on and off the field of the guys who play for me now.

“I do not believe it was a good idea for Shawn to be in our locker room, and had I been made aware of the situation in advance, it would not have happened.”

This comes off as awfully petty. Grobe made the comments he made and for the media to need to ask follow ups of every angle humanly possible to get clarification is not really necessary. Clearly, with all the news around Baylor, Grobe is not used to this kind of media attention, and did not receive it during his time at Wake Forest.

What is interesting about this follow up is that Grobe never denies knowing of Oakman’s presence in the locker room. But, he said in the original statement, “There are always a lot of people around [in the locker room]. But, I had no issues. I didn’t know he was there, or who he is.”

THAT was his chance to clarify his own silly statement. He was even asked a follow up confirming, “I don’t know who Shawn Oakman is.” For him to say the media twisted his words is a joke. Wake up, coach.