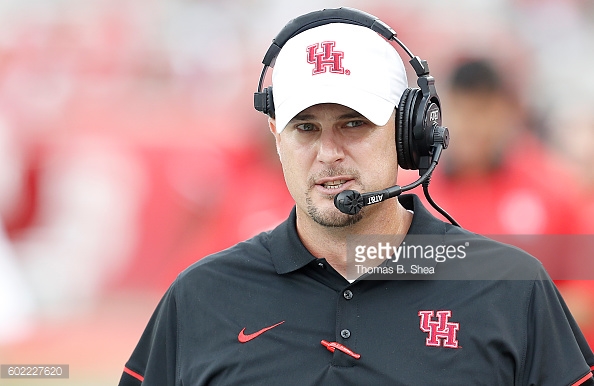 As the Big 12 expansion debate rages on, the Houston Cougars continue to get in done on the football field, and are believed to be one of the favorites to get added to the Big 12.

But, Houston head coach Tom Herman admitted on Tuesday, when joining Tiki and Tierney on CBS Sports Radio, that their success on the football field might be a deterrent for some in the Big 12.

Herman said, “Those decisions are made by presidents. They’re made by boards of regents. They’re not asking athletic directors and football coaches. I think if you left it up to the football coaches, absolutely, we wouldn’t have a chance in heck to get in the Big 12 because we’re already beating some of those teams on recruits here in our great city of Houston. We’re the hometown college football team of the third-biggest city in America, and there’s really good high school football, and it’s the eighth-largest TV market. So certainly if you’re an athletic director or a football coach, that probably worries you a little bit.”

Herman is clearly paying attention, as some coaches across the Big 12 have expressed their hesitancy in welcoming Houston to the conference.

Oklahoma State coach Mike Gundy was honest last month saying, “The concern is, and where that comment is coming from, is if your northern schools put a southern school, and another school in Texas, in the same league, that essentially is going to pull recruits from all of us. That’s what it comes down to.”

Kansas State offensive coordinator Dana Dimel was also outspoken on the issue, adding,“You can recruit Houston. If they get into the Big 12 they will be tough to beat in recruiting, because of the proximity.”

Herman clearly understands much of the politics behind what is going on here with Big 12 expansion. But, it’s unfortunate. The Big 12 is getting smoked in recruiting by the SEC, even in the state of Texas. If adding UH can bring in another quality program and help the Big 12 keep some of those Texas kids in the Big 12, that would be a big win for the conference. One of the Big 12’s biggest problems in recent years has been that every university/program is looking out for itself over the greater good of the conference. It looks like that is exactly what is happening in this situation as well.

Anyway, to hear the entire interview with my co-workers, Tiki Barber and Brandon Tierney, at CBS Sports radio, take a listen below.

Big 12 coaches weigh in on disappointing non-conference results
HCS Game of the Week Preview: #16 Baylor vs. Oklahoma State
To Top