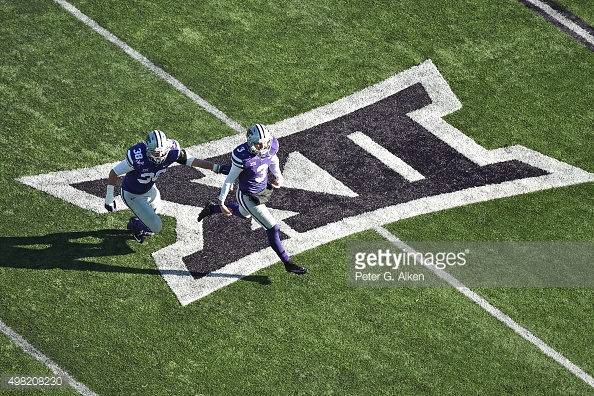 It’s Week 3 of our new feature we decided to start this season as a fun way to keep the discussion flowing from the previous week of games and lead into the upcoming week of games. Plus, instead of just offensive/defensive player(s) of the week, we tried to mix it up to incorporate more opinions and thought-provoking discussion.

Most likely to have a post-game beer bought for him: Kansas State FB Winston Dimel: I realize there are several other candidates for this spot (Mahomes, Rudolph, etc), but man, you have got to buy a post-game beer for a fullback any chance you get. Dimel ran for four first-half touchdowns in a 63-7 win over Florida Atlantic. Dimel only carried the ball 5 times for 19 yards, but hell, you gotta love Bill Snyder trying to bring back the fullback in football. Also, this was the latest on the calendar that Kansas State has had their home opener since 1992, so there were likely several folks looking to buy a Wildcat or two a few beers at the Manhattan bars.

Dimel replaces Glenn Gronkowski at the position as well, so there are likely many fans interested to see if Dimel can not only mirror Gronk on the field, but under the table. Lastly, Dimel seems like my kinda guy … a #NATTYDADDY.

Most likely to have a warm beer dumped on him: Texas defensive coordinator Vance Bedford: His unit allowed 50 points to Cal, and it should have been 57. Bedford does not speak to the media after games (per Charlie Strong policy), but that policy forces the young men into tough spots after games. We wrote earlier this week that Bedford needs to have some answers in his press conference this week, and if he doesn’t, he should be skating on thin ice on the 40 acres. Get this man a warm Miller Lite … right on his head.

Most likely to have post-game beer bought for him, but buyer might regret it:  Oklahoma State RB Rennie Childs: Childs ran for 4 touchdowns and over 100 yards in a 45-38 win against Pittsburgh on Saturday. Childs has stood out from a crowded backfield to, at least for now, become the #1 running back in Stillwater. But, with the shaky offensive line, and a running game that is still last in the Big 12 in yards per game, I would be hesitant to buy a beer for any running back or offensive lineman in Stillwater… unless I found the beer sitting on the top of the urinal and was room temperature. Then, be my guest.

Most likely to have a post-game beer bought for him (out of sympathy): Oklahoma head coach Bob Stoops: I’m not sure if Stoops bought into OU’s preseason hype. My guess is he didn’t and he knew there were more holes to fill than the media realized. Or, I should say, some in the media… as we talked ad nauseum about how the Sooners were far too heavy of a favorite at 2/3 odds to win the Big 12. The Sooners now have the same record as the Kansas Jayhawks (yes, I know there is more to it than that), but it’s still pretty wild. Yes, Oklahoma can still go and win the Big 12. But, this team is not going to make the College Football Playoff. They can’t. And for that to be over on September 17th is awfully sad for Sooner Nation. Get Small Game Bob a cold one … just out of pity.

Put him under the ice luge: the entire West Virginia fan base: Although if we are being honest, my guess is the entire WVU fan base was already under an ice luge before we handed out this award. Most teams and fan bases across the Big 12 are not feeling very good about their programs. But, the Mountaineers should be. They rolled a Missouri team in Week 1 that hung with Georgia last week, are one of only two undefeated teams left in the conference, and have another chance to shine in a non-conference game this Saturday against BYU. For a team that was picked to finish 7th in the preseason poll, things are looking up in Morgantown behind a really good offensive line, 3-headed monster in the running game, and a defense that is exceeding expectations.