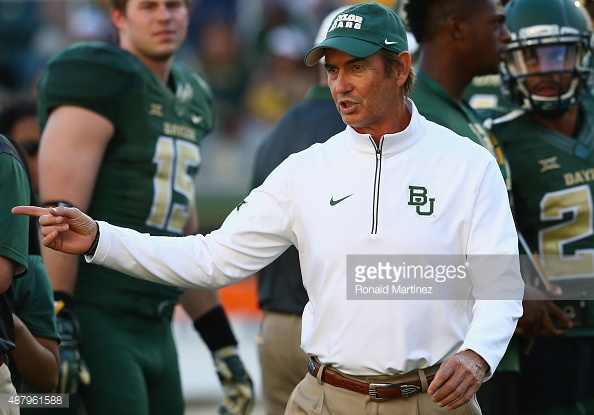 Former Baylor head coach Art Briles and former athletic director Ian McCaw received some welcomed news on Wednesday when a federal judge dismissed the two men from a lawsuit filed by woman who said they and the school ignored her claims that she was raped by a former player who was later convicted.

Jasmin Hernandez sued Briles and McCaw in March. But Briles’ lawyers argued both Briles and McCaw could not be sued in their official role under the Title IX federal gender discrimination law cited in the lawsuit.

The lawsuit against Baylor still stands and the woman’s attorney, Alex Zalkin, said she will file new lawsuits against Briles and McCaw as individuals in state court.

Briles’ attorneys filed a federal motion in July seeking to remove Briles as a defendant in the suit.

Briles’ attorney Kenneth Tekell said, “Coach Art Briles is very happy he has been dismissed as a defendant in this case. Plaintiffs may very well allege future claims against him and we will take those on if and when they are filed.”

Hernandez was sexually assaulted by former Baylor football player Tevin Elliott in April 2012, who’s serving a 20-year prison sentence after he was found guilty of two counts of sexual assault

One of Hernandez’s allegations are that players were recruited without regard to the harm they might cause others. Elliot had five women report to the police that they were raped or assaulted by him between October 2009 and April 2012.

Baylor fired Briles in May and McCaw resigned after the Pepper Hamilton Report showed the University had mishandled allegations of sexual assault, including claims made against football players.